You are here: Home / News / African American / Embracing Diversity in the Workplace

by John A. Huguley – Freelance Writer

Since the 1970’s, The Port of Tacoma has embraced diversity in the workplace by employing talented job applicants from multicultural backgrounds as well as seeking out qualified women and minorities to help their vision for the future. Both past and present employees discuss their experiences working at the Port.

Bernice Griffin began her service at the Port of Tacoma in 1997 as the Ports the EEO/Diversity Coordinator. She retired in 2014 as Senior Manager, Human Resources. During Ms. Griffin’s tenure at the Port, she helped launch programs designed to reach out and employ talented individuals from multiple backgrounds. Griffin says, “management had the vision to make the workforce reflective of the community.”

With the blessings of management, the port commission, and the executive team, Griffin and her fellow staff were able to work with local labor organizations, technical colleges, nearby Native American tribes, and job fairs to recruit new employees. The goal was to seek talented people while broadening the perspective of what good talent looks like.

Some of the positions at the Port require skilled journey level workers; these positions include carpenters, electricians, equipment mechanics, and plumbers. To meet the requirements of the maritime industry for these journey level positions, Bernice Griffin and her team launched an apprenticeship program with the goal to increase the number of women and minorities at the port.

While working in the Human Resources Department, Griffin also managed a diversity training program which started in the early 70s and continues to this day. Among other events, she led Black History Month and Martin Luther King Day celebrations which occurred while she was employed there.

Bernice Griffin is exceptionally humble and wants it to be clear that several pioneers came before her, who did wonderful things at the Port of Tacoma to increase the number of minorities and women. She says, “it took a community of folks with diverse talents and experiences to help the port develop and grow – and to make a difference.” Griffin goes on to say, “if it were not for the leadership, her team would not have been able to do all the things that were accomplished.”; concluding with, “the People are the Key,” they were the reason she stayed until retirement.

Today the Port of Tacoma employs about 200 people consisting of administration, maintenance, security, and skilled traits. It offers training and development opportunities. The Port continues to work in the community as well as on social media to help make people aware of new job openings.

Louis P. Cooper Jr. is the current Senior Director of Security and Labor Relations. Cooper has served in multiple positions at the Port over the last 15 years. During his time at the Port he has seen positive improvements, in terms of diversity, inclusion, and equality – but also understands there’s still work to be done. Cooper expressed that moving forward the Port and its management, “must continue to be deliberate in their mission to the people that reflect this community.” Cooper finishes by saying, “we need to reengage in the things we were committed to doing years ago – when it comes to cultural events, diversity, and inclusion.”

Christine Disnute is the Ports current Facilities Management Specialist. She joined the team in December 2017. Disnute says, “there is lots of diversity in management,” and, “since I’ve been here, the Port has made big strides to make the workplace more diverse.” Disnute is optimistic of the progress and goes on to explain how her diverse upbringing helps her to be successful at her job.

Christine Disnute is a woman of color. She recently finished her MBA program and hopes to apply it to helping the Port grow in an ever-expanding industry. Disnute would like to one day move into executive management where she can also do more for diversity at the workplace. Disnute concluded with, “I love working for the port and take pride in everything I do.”

Founded in 1918, the Port is located on the Tacoma waterfront at the South East corner of the Puget Sound, it supports more than 29,000 jobs and generates $3 billion in annual economic activity. It is among the largest container ports in North America, and a major center for automobile shipments, bulk, breakbulk and heavy-lift cargoes.

About: John A. Huguley – Freelance Writer 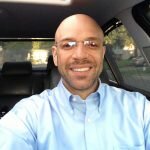 Born in 1966, John is a native Seattle Washington. He grew up in the original Holly Park government housing projects which were built in 1942. His old neighborhood was demolished a few years after John moved out on his own, but the vivid memories of living in this tight-knit, low-income community shaped who he is today.

As a kid, John formed a fascination for creative writing, drawing and making original comic strips. Some of his inspiration came from two of his childhood literary idols; Charles M. Schulz (Peanuts Comics) and Theodor Seuss Geisel (Dr. Seuss).

At a young age, John was also drawn to advertising after watching episodes of the American television sitcom “Bewitched”. On the show, the lead characters’ husband Darrin Stephens was an Advertising Agent. John would mimic the workings of the television Ad-Agent, and create his own storyboards for numerous sales pitches.

In the first grade, John put together a unique idea for teaching students how to manage money. He pitched his clever idea to his first-grade teacher, Miss Cochran at Van Asselt Elementary School. She liked it so much that she later implemented it into her curriculum. The word of his brilliant idea spread, and eventually made its way to being featured on the local evening news.

In addition to John’s passion for creative writing, he loves to take photographs; thousands of them. John received his first film camera at around age six and has not stopped taking pictures since. John currently has an archive of over 124,000 personally taken photos; some dating back to the 1970’s.

When John was ten years old he purchased his first pull-start motor-bike for fifty-dollars; using money that he saved from his paper route, mowing lawns, and being a young entrepreneur.

John earned some of his money as a kid selling a ten-cent homemade frozen treat, that he creatively named “Cupsicles”. To promote his product, he created a glimmering poster made of cardboard covered with aluminum foil. On the poster, he used colored markers to write sales pitches like: “Better Than Popsicles”, “Limited Amounts Left” and “Get Yours Now!”. By the end of his first summer in business, John couldn’t produce “Cupsicles” fast enough to stay up with the neighborhood demand.  John was onto something…

With over 25 years of professional experience and a lifetime of passion for the business, John would love to work on your next project, contact him today – you’ll be glad you did.
Visit: JohnHuguley.com