You are here: Home / Archives for Faith / Events

African Americans reconnected with their African roots in the journey of a lifetime.

The group visited Cape Coast Slave Castle – one of several castles along the coast of West Africa –  where millions of Africans suffered in dungeons at the hands of European slave traders. As the group wandered from chamber to chamber, hanging on to every word as the guide narrated the painful history of the ground they walked on, the agony in the air was almost tangible.

The journey began August 19th with a ceremony at the Jamestown Historic Center to honor the first enslaved Africans to arrive at Point Comfort and Fort Monroe near Hampton, VA.  The reflective, yet uplifting event included a processional, remarks from local and national NAACP leaders and an opportunity for participants to write messages to their ancestors.

Following the tour, nearly 80 participants received the results of their African ancestry, through AfricanAncestry.com. People traced their roots to Cameroun, Togo, Gabon, Guinea Bissau, Sierra Leone, Liberia, Equatorial Guinea, Senegal and more. The Haynes family, a multigenerational family of women traveling from Howard County, MD, were the last participants to be called. The crowd erupted in cheer and tears of joy when it was announced they were matrilineal descendants of the Akan people of Ghana. 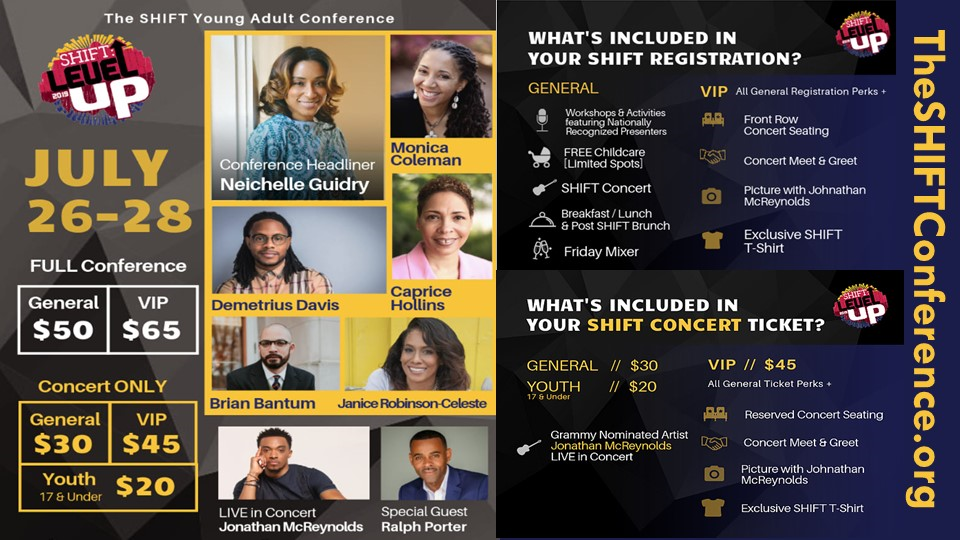 SHIFT is a 3-day city-wide conference for and by young adults (18-39 years old).  Our mission is to challenge, motivate and equip a new generation of effective leaders.

SHIFT will provide the motivation and practical tools necessary for the holistic development of the “total person”–Mind. Body. Spirit.

SHIFT – A young adult conference unlike any other in the Pacific Northwest! SHIFT has one main goal: to EMPOWER young adults to become high impact leaders in the church, workplace, community, & family life. Our workshops and activities address the needs of the TOTAL person. Mind, body and spirit 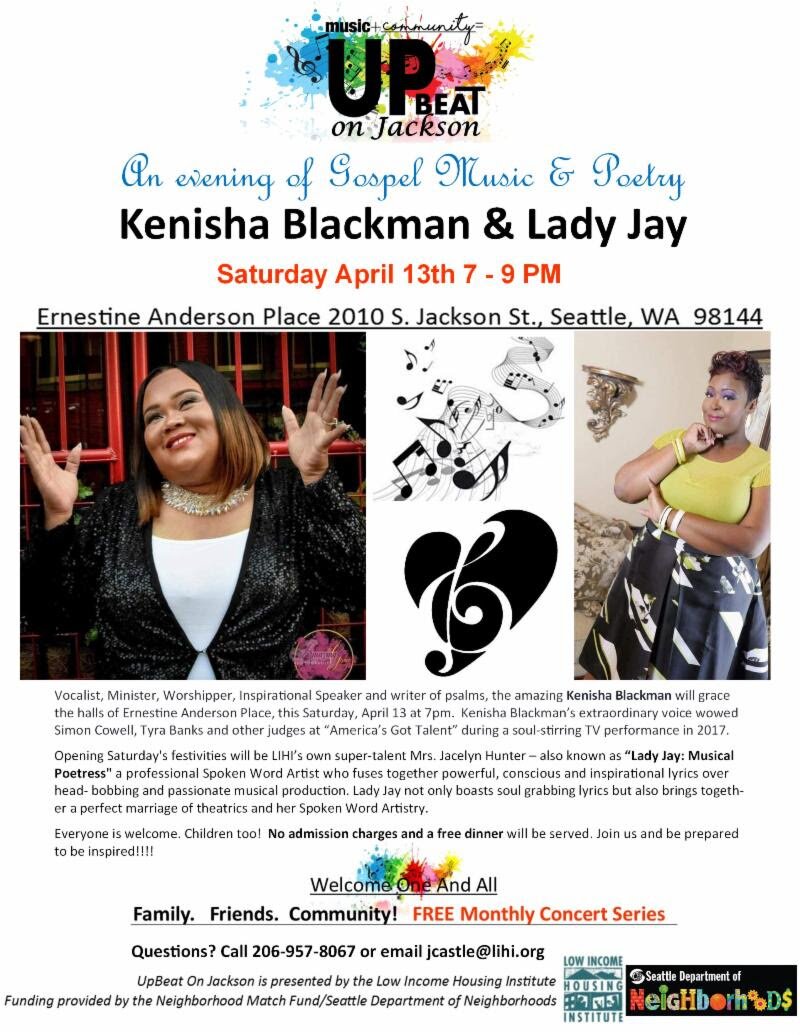 Upbeat on Jackson Concerts are free, including refreshments! Friends, neighbors, music lovers of all ages are invited to attend!  The series honors the legacy of Ernestine Anderson and the rich diversity and musical history of the Central Area, welcoming friends and neighbors to connect, celebrate community and enjoy music.  We thank the Seattle Department of Neighborhood for a Neighborhood Matching Grant for this concert series.

We are pleased to inform you of Rainier Beach Job & Resource Fair, Saturday, March 23rd, 2019, 12 PM – 2:00 PM, at the Rainier Beach Community Center, 8825 Rainier Avenue S., Seattle, WA., 98118. Interviews will be available on-site, so come prepared and dress appropriately. Over 800 jobs available. Volunteers needed, sign up HERE.
Help us spread the word by sharing with your students, clients, customers, members, circle of friends, family and neighbors. Fliers can be posted on community boards, near your mailboxes, laundry room, elevator, announcement and at the office.
To volunteer sign up HERE
For job seekers sign up HERE
In Service for You,
Danielle Jackson, CHAMPS President/Founder 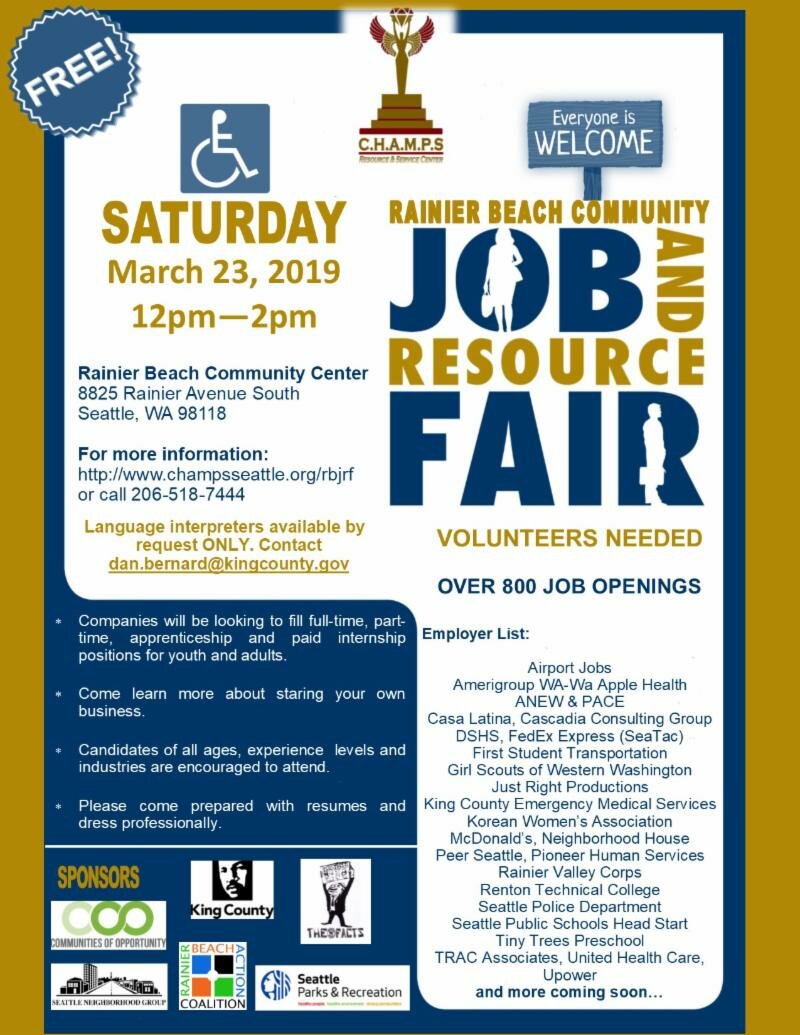 “We’re Better Together” The 31st Annual Dr. Martin Luther King, Jr. Birthday Celebration in Tacoma will once again bring the community together to celebrate Monday, January 21, 2019 as a day on, not a day off.

There is free holiday on-street parking and free parking at Freighthouse Square (2501 E. D Street). Freighthouse Square is easily accessible via the LINK Light Rail and stops at the Convention Center. There will also be signage directing event attendees to designated complimentary parking stalls that will be made available on a first-come, first-served basis at the Greater Tacoma Convention Center.

The Annual Martin Luther King, Jr. Birthday Celebration program is spearheaded by a City Council-appointed City Events and Recognition Committee. The Committee is comprised of local community leaders from a broad array of backgrounds and areas of expertise.

The City Events and Recognition Committee serves as an advisory and action committee on matters pertaining to City-hosted events and special recognition programs. Members are responsible for planning, reviewing and evaluating events, engaging the community in its fundraising efforts, and soliciting corporate and private sponsorships to leverage funds for City-hosted events such as the Annual Martin Luther King, Jr. Birthday Celebration and the City of Destiny Awards. 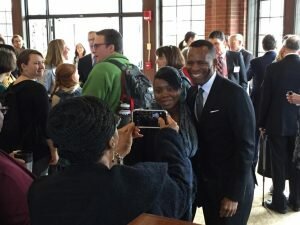 A distinguished scholar, teacher, and college administrator,Isiaah Crawford became president of University of Puget Sound on July 1, 2016, following an extensive national search. Crawford’s academic work and achievements as a senior administrator are closely aligned with the values and aspirations of Puget Sound, and with the key areas of challenge and opportunity facing higher education today.

Key areas of focus during his service to Seattle University included strategic planning; strengthening shared governance; securing grants and other gifts in support of fundraising objectives; supporting teaching, research, and service activities of the faculty; and establishing the Center for Environmental Justice and Sustainability, the Institute for Catholic Thought and Culture, and the School of New and Continuing Studies, which began operation in academic year 2015–16. Working with university leadership, he participated in the development of more than $200 million in key facilities projects, including renovation of the library and establishment of a learning commons; a new residence hall; a new fitness center and remodeled intramural athletic field; the School of Law annex; an admission and alumni center; and planning for a new science facility.

From 2004 to 2008, Crawford was dean of the College of Arts and Sciences at Loyola University Chicago, where he joined the faculty of the Department of Psychology in 1987 as an assistant professor and through the years was tenured and promoted to the rank of professor in 1999. He taught courses in psychology of personality, human sexuality, addictive behavior, human diversity, and minority mental health. He also served as graduate program director of the clinical psychology doctoral program (1994–97), Department of Psychology chair (1997–2003), and interim dean of the College of Arts and Sciences (2003–04).

A recipient of national awards, including three from the American Psychological Association, he has been published in numerous scholarly journals over the past 30 years—including, most recently, the Archives of Sexual Behavior, Journal of Homosexuality, Journal of Child and Family Studies, AIDS Care, and Journal of Psychology & Human Sexuality—on topics including post-traumatic stress, racial inequality, HIV/AIDS, sexual abuse, visual impairment, poverty, depression, and more. Crawford has served on the editorial boards of professional publications, including the International Journal of Sexual Health, Journal of Visual Impairment & Blindness, and Journal of HIV/AIDS Prevention & Education for Adolescents & Children. He serves on the board of directors for the National Association of Independent Colleges and Universities, The Annapolis Group, Independent Colleges of Washington, and the Northwest Conference, as well as the Tacoma Art Museum, Seattle Symphony, Providence St. Joseph Health (chair, Work/Life Committee), Providence Health Plan (chair, Governance Committee) and The ROPA Corporation (St. Louis).

Crawford’s numerous other activities include serving on the board of directors for Swedish Health Services (2010–12), AIDS Foundation of Chicago (1994–08; board president, 2004–06), and Horizons Community Center (1988–92). He is former president of the Clinical Psychologists Licensing and Disciplinary Board of the Illinois Department of Professional Regulation, and previously served on the national advisory board of the Sexual Orientation and Gender Institute (2006–08), National Institutes of Health Panel Review–AIDS and Related Research (1999–2002), and various roles with the American Psychological Association. 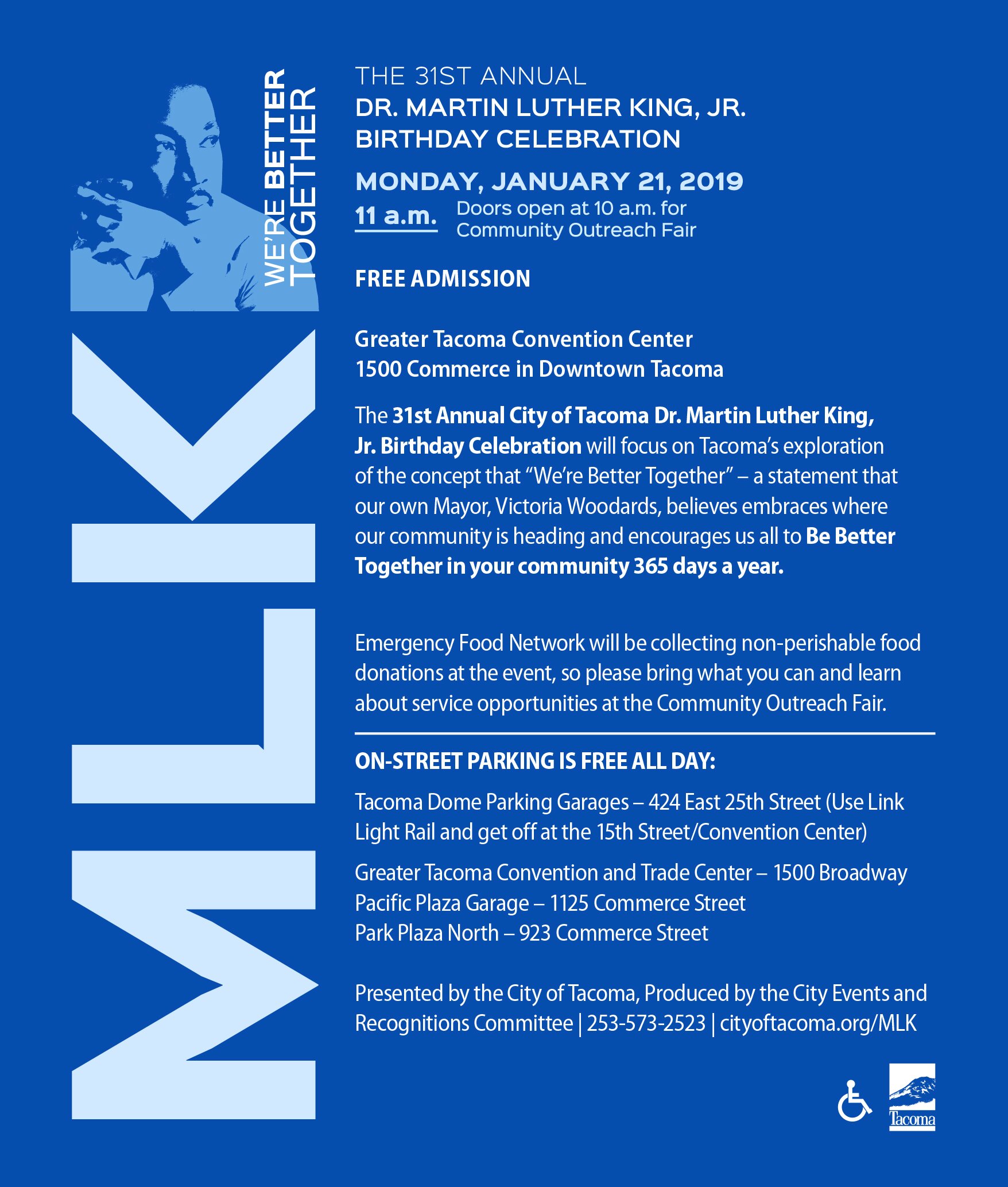 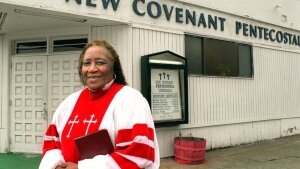 Dr. Travis co-founded New Covenant Pentecostal Tabernacle in Tacoma, Washington, more than 40 years ago, and she has also initiated numerous outreach ministries. New Covenant’s “Feeding Program” has been serving a hot evening meal every day since March 1985. In addition, Dr. Travis maintains monthly ministries at McNeil Island Correction Center, Orchard Park Health Care Center, and Tacoma Rescue Mission. Her radio ministry, “The Midnight Cry Messenger,” was heard for three years on KBLE and then for two years on KLAY. She was Vice President of the Full Gospel Pentecostal Association, headquartered in Portland, Oregon, for 17 years.

Dr. Travis has also trained many men and women of God in ministry. Although passed at 91 years of age, she remains active visiting people who are sick or shut-in, as well as holding prayer meetings and Bible study sessions until the Lord called her home. Her faith, perseverance, and love of the gospel of Jesus Christ was served as an example to others. Her ultimate objective was to make known to this generation the power of God. 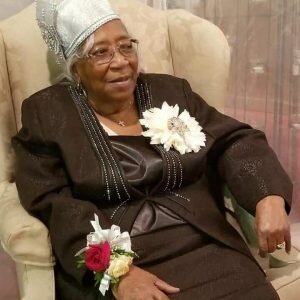 My Heart is hurt but My soul rejoiced to know that a Queen is seating in her throne next to our King, our Lord, and our Savior. Doctor Edna Travis was so much to so many people. She will be more than missed. My heartfelt condolences and praises go out to all of the family, friends, and followers of Pastor Edna Travis.
“I will always hold a special smile on my heart for the way she would always make me feel. We love you Pastor Travis rest in your garden of peace”.
D.Beaver – NW FACTS MEDIA GROUP

Dr. Edna Earl Travis has transitioned from this life on January 2, 2019, and is now celebrating with her Lord and Savior Jesus Christ. 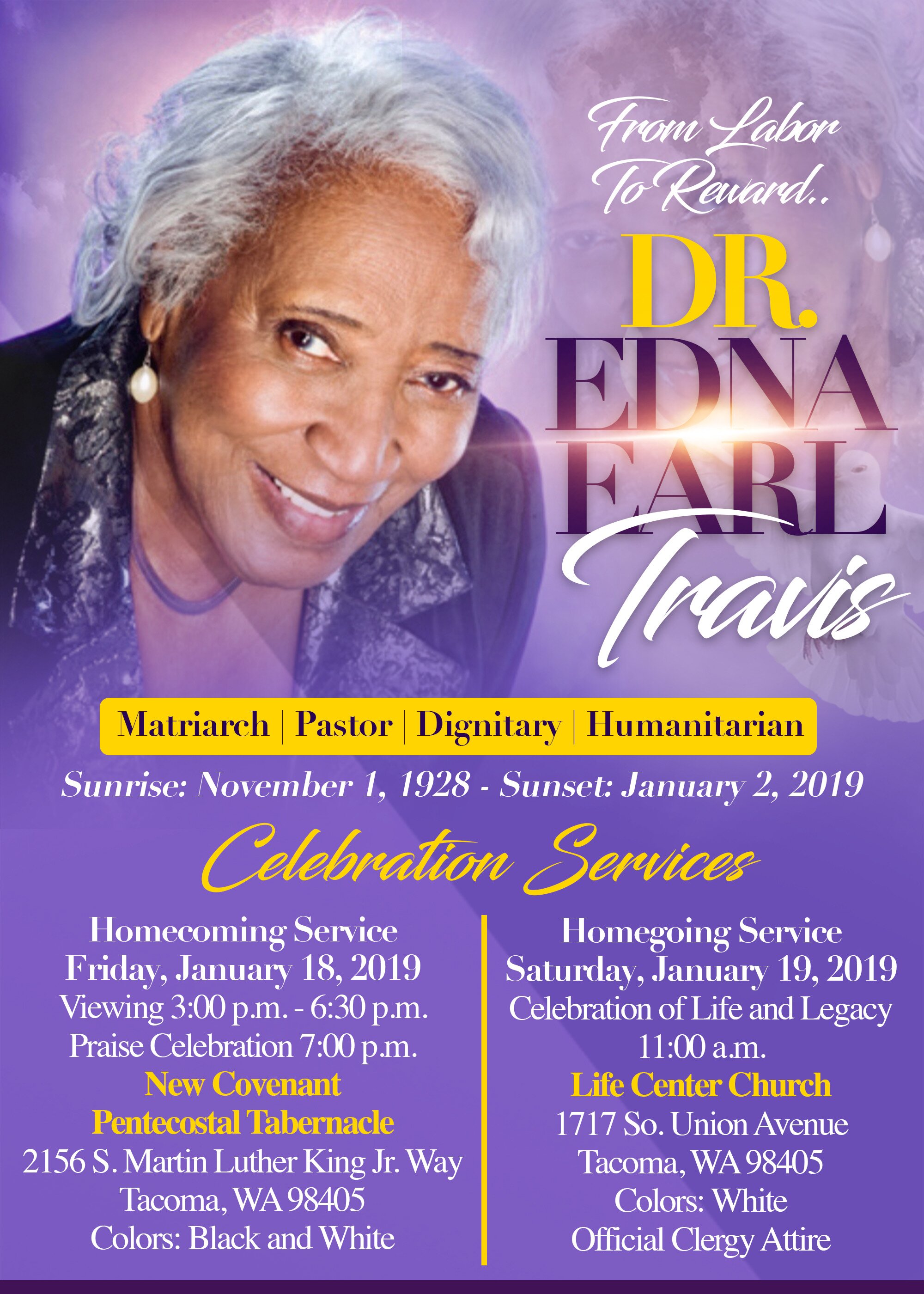 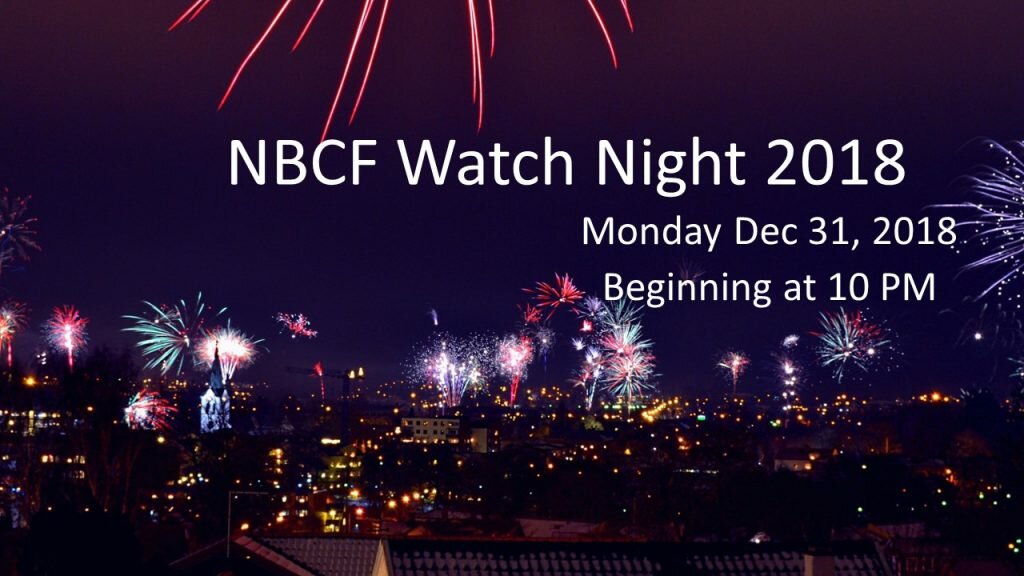 Join us for Watch Night Service 2018 & Celebration to bring in the New Year!
10:00pm – Games/Activities
11:00pm – Worship Service
12:15am – Celebration Begins/Refreshments provided
Stay Tuned for additional details.
Please RSVP so we can plan to serve you!
https://goo.gl/forms/lpdYUBUHfiChvruO2 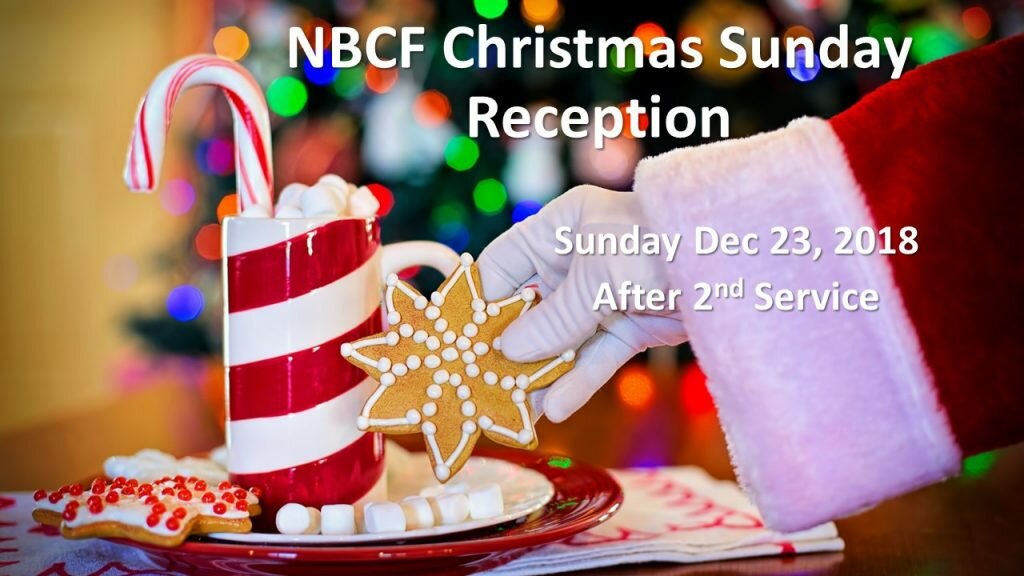 Join 100 Black Parents for this 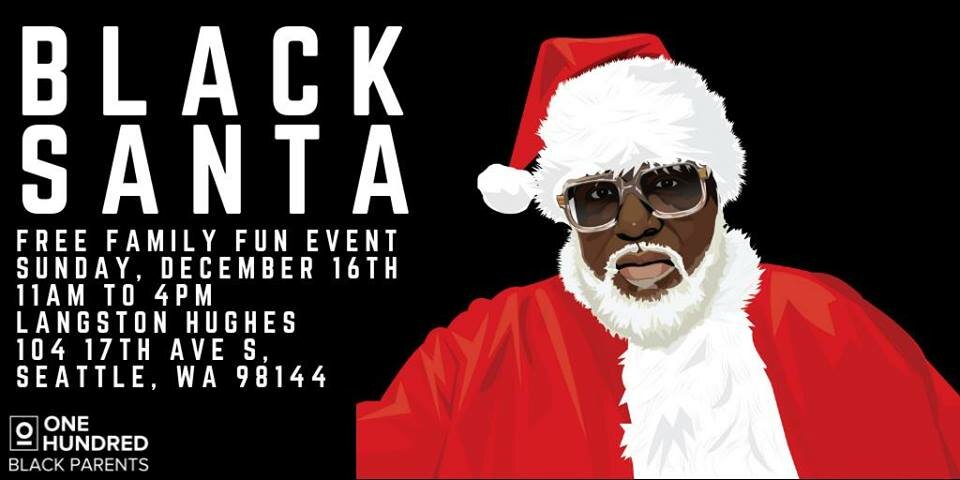 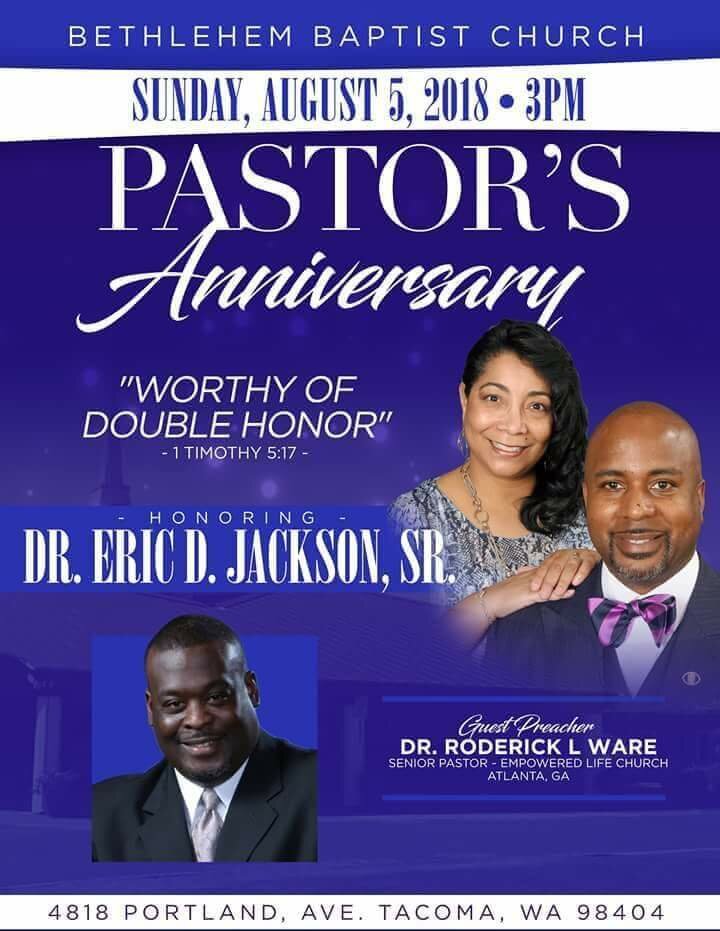 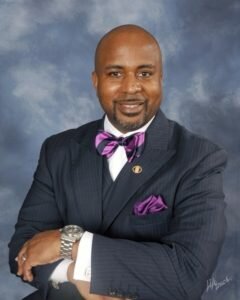 Dr. Jackson is a native of Alexandria, Louisiana, currently resides in University Place, Washington. He’s married to Rev. Evette Jackson, and they have two sons, Omari and Eric, II.

After serving for several years, Pastor Jackson was licensed and ordained at Hopewell Missionary Baptist Church, in Norcross, Georgia, by Bishop Dr. William Sheals.  He went on to serve as Assistant to the Pastor, Youth Pastor, and Singles’ Pastor at The Greater Piney Grove Baptist Church, in Atlanta, Georgia.

He was the founding pastor of the Greater Heights Christian Church in Lithonia, Georgia, where he served for 8 years.  After leaving Georgia, he served as the senior pastor of the Main Post Chapel Gospel Congregation in Schofield Barracks, Hawaii.  Prior to 2014, Dr. Jackson resided in Ewa Beach, Hawaii (the Island of Oahu), while serving a tour of duty at Schofield Barracks and Fort Shafter.  He now lives in University Place, Washington, and serves as senior pastor of Bethlehem Baptist Church in Tacoma.  Additionally, Pastor Jackson’s ministry has reached abroad, as well.  He’s taken pilgrimages throughout Israel and done missionary work in Haiti. 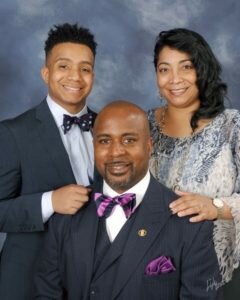 Additionally, he has spent over 30 years in the military – over 25 years as an officer.  From 2007 to 2008, Pastor Jackson completed a tour of duty in Iraq, where he ministered to hundreds of Soldiers on a weekly basis and trained over 50 ministers – two of which were licensed into the Gospel ministry. Upon completion of his tour, he became an Army Chaplain and continues to minister today. He has also served in this capacity in the local chapter of his fraternity, Alpha Phi Alpha, where he’s a Life Member. Likewise, he was certified by the Georgia Association of Chiefs of Police as a police chaplain.

Over the years, Pastor Jackson’s ministry has been heavily involved in the lives of the youth and unmarried adults. Beyond that, he has developed a seven-phase series of Ministers’ Development Training courses, in which he covers various subject from ministerial conduct to roles of a pastor.  In 2001, after having trained more than 75 ministers, Pastor Jackson launched EDJ Ministries, Inc., whose goal is to educate and elevate the thinking of ministers and lay-leaders. 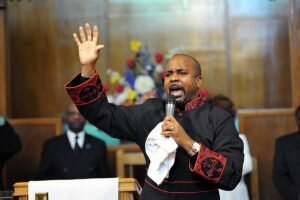 This man of God is a preacher, teacher, speaker, poet, and the author of Good News From On High!  His personal mission is to educate, empower, and encourage all people – both young and mature, “churched” and “un-churched,” laypersons and ministers. With such a love for people, Pastor Jackson has devoted his life to God’s service and people.

Pastor Jackson’s motto is: “Preaching to encourage…and teaching to empower.” This is a goal he sets for reaching God’s people, so they are spiritually equipped.  Above all…Pastor Dr. Eric D. Jackson is spirit-filled. He loves the Lord, is crucified with Him!