You are here: Home / News / African American / “Paradise Under Reconstruction in the Aesthetic of Funk: A Quantum Leap, Starting From The Top…!!!” 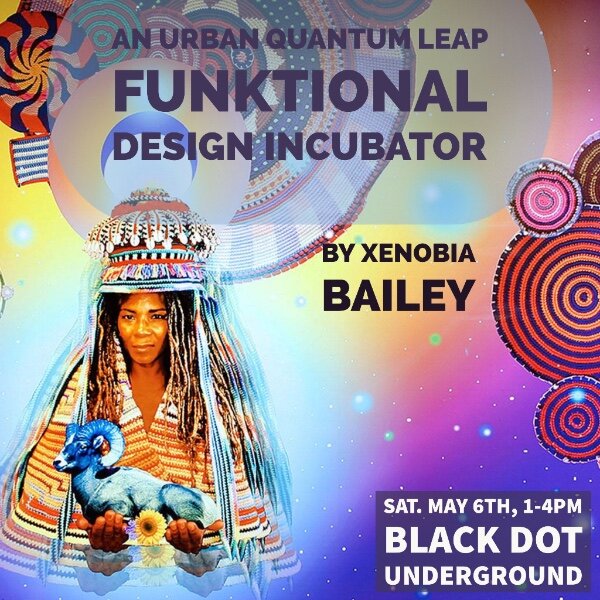 Artist Xenobia Bailey follows her two-month Seattle Presents Gallery exhibition, “Paradise Under Reconstruction in the Aesthetic of Funk: A Quantum Leap, Starting From The Top…!!!”, with an
inspirational presentation that reverses the negative history of African Americans by highlighting the socially engineered, non-commercialized/non-industrialized material culture that evolved after emancipation. This self-sustainable, rural and urban lifestyle created “Funktional Design”, fitting the needs of the home, field and community.

Participants will receive a community needs survey in advance of the workshop that will direct Bailey’s lecture and workshop. In small charrette groups, which will periodically be coached with supportive contributions by Bailey, participants will be asked to remix a world-class/culturally sensitive, community identity and design aesthetic, that serves household and community health and well-being needs, for social and economic revitalization.

About Xenobia Bailey:
Born and raised in Seattle, Washington, Bailey studied ethnomusicology at the University of Washington, and received her BA in industrial design from Pratt Institute in Brooklyn, NY. Her art/design/cultural activist practice commenced in 1999 at her Studio Museum in Harlem Artist-in-Residency with an epic project, Paradise Under Reconstruction in the Aesthetic of Funk.

Her designs are a “Seattle-centric”, People of Color, multi-cultural experience, which results in a funky visual aesthetic that emerged from her mother’s and other African American “town & country” urban homemakers in her Central District community. Today, the New York City-based Bailey is best known for the evolution of domestic crochet textiles into large scale wall art, into crochet emotionally engineered visual energy-scape equations, by manipulating frequency and vibration of colors, patterns, size and space of crochet.

Bailey recently completed installations of two public art commissions titled Funkational Vibrations, for 34th St-Hudson Yards subway station in New York, and for the MTA Arts & Design program. Her work is in the permanent collections at Harlem’s Schomberg Center for Research in Black Culture in Harlem, New York, the Museum of Art and Design, Facebook New York Campus and American embassies in North Africa and the Middle East.