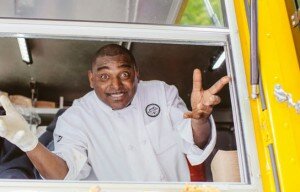 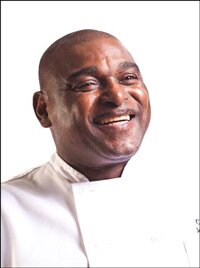 Born and raised in New Orleans, Chef Jemil Aziz Johnson is proud of his Cajun and Creole heritage. Chef Jemil has more than 20 years of experience in the culinary arts–cooking in New Orleans, Seattle, Dallas and throughout Europe. He has won several awards, including best entree and dessert at the Bite of Seattle, and Seattle’s Best Appetizer of the Year for his Crawfish Beignets. Jemil attended the Culinary Institute of America in Hyde Park, NY, and has been a member of the Executive Chefs of America since 1991. Chef Jemil as owned and operated several restaurants in Seattle, including La Louisiana. Come on down and say hi to Chef Jemil at the window of his populat truck–Jemil’s Big Easy, for a taste of the real thing y’all. 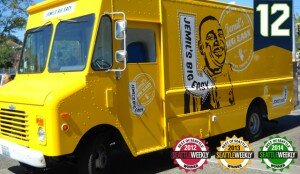 You can find us in South Lake Union, downtown, and all around the greater Seattle area. We serve lunch just about every day, and dinner a couple times a week. Oh and did we mention we feed the Seahawks post home games outside the locker room? They love them some Jemil’s! 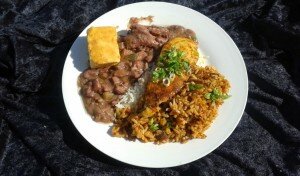 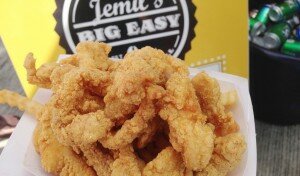 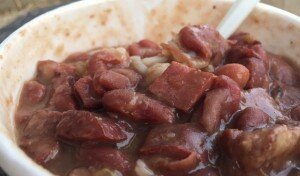 THE VOODOO AND WHO DO OF JEMIL’S BIG EASY
New Orleans is a delicious melting pot of cultures, rituals, and cuisine. We feature both Cajun and Creole food. So let’s get your Louisiana on!
WHAT IS THE DIFFERENCE BETWEEN CAJUN AND CREOLE?
Cajun Rural, French-speaking people living on the bayous and plains of southern Louisiana. The food is spicy, substantial and a blend of French, African, Caribbean, Italian, and Cajun with a host of other influences that will dazzle your palate.
Creole From the spanish criollo, or native; the term literally refers to a free (unslaved) person born to Spanish or French settlers in the 19th century. This food is often “blackened” (catfish, chicken, and shrimp) and features one pot wonders, such as gumbo.
FROM OUR MENU: SAY IT LIKE YOU MEAN IT!
Red beans and rice A mainstay for hungry peeps. One of Jemil’s favorites and he puts tons of love into every bowl. As you guessed, it’s red beans and tender rice, with succulent ham pieces and our own house-smoked sausage. Satisfying!
Jambalaya (jum-ba-lay-ya). Spicy rice “jumbled” together with tomatoes, chicken, andouille (an-doo-ee) sausage, smoked sausage, tomatoes, garlic, bell peppers, celery, and onions. Not to be missed!
Big Easy Gumbo Ah, you’ve hit the mother load here. This is our signature, deluxe dish. 3 different sausages and herb-roasted chicken. Gumbo is a soup served over rice. Excellent!
Étouffée (Eh-too-fay) So here’s where you have to get your French on. This is the bomb! Étouffée literally means “smothered” in a rich and spicy roux (roo) of celery, red bell peppers, onions, and spices, then simmered and reduced to perfection. Served over tender rice with either chicken, shrimp, crawfish, or sautéed seasonal vegetables.
Muffaletta (Moo-fa-let-a!) Our Big Ass sandwich that is split-worthy! A N’awlins (that’s Cajun for New Orleans) classic. If you want to impress coworkers, this is the one. Enough to share (if they are so worthy). This is the sandwich that dreams are made of: Mortadella, ham, provolone cheese, Genoa (that’s Italian) salami and Jemil’s special olive relish then grilled to perfection. Enough said.
Po-Boys For this amazing sandwich, we start with fresh baked french bread and dress it with tomatoes, pickles, lettuce and a sauce so secret we can’t tell you about it, except it’s remarkable. Pick your protein: Blackened or Fried Chicken, Shrimp, or Catfish. Fried Oysters, Crawfish, or Soft-shell Crab. Grilled Seasonal Vegetables.
Catfish and Chips Just what it sounds like. Tender catfish is flash-fried and served with Jemil’s Cajun spiced fries. Comes with 2 sauces. Amazing!