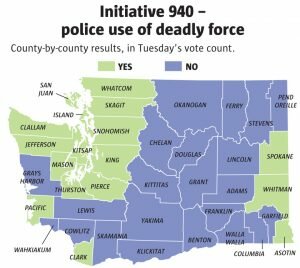 An initiative that requires police officers to receive training in violence de-escalation, mental health, and first aid so that officers will have greater skills to resolve conflict without the use of physical or deadly force was confirmed by voters this evening. Initiative 940 will require independent investigation when an officer causes serious injury or death and would ensure tribes are notified if a tribal member was injured or killed when interacting with law enforcement. Initiative 940 will also replace a malice intent requirement with the lower threshold to determine when any use of lethal force was unlawful.

“Today, voters made history by becoming the first state to require independent investigations when police cause serious injury or employ deadly force as required by a state’s use of force law. This initiative is a major step forward in holding police accountable when they unlawfully use lethal force, and could potentially save lives by preventing lethal encounters before they happen.

“Every state in the U.S. has laws that fall short of meeting the international standard for the limited occasions when police can use lethal force. While not perfect, this initiative will be a huge step forward and would set an example for better practices, true justice, and accountability.”