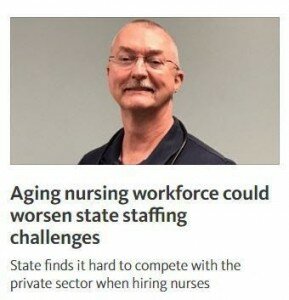 Allen Goodwin is concerned about the future of his profession and what it could mean for people who need health care.

Goodwin, a 57-year-old nursing care consultant for the state Department of Social and Health Services, works in an office where a majority of nurses are nearing retirement and in a field where a shortage of nurses will mean less comprehensive care for the agency’s low-income clients.

“The nursing force is aging,” Goodwin said. “We have trouble recruiting nurses because they can make more money in the private sector. They can earn overtime. … It’s just difficult to recruit nurses away from those higher paying jobs into what we do.”

To address the problem, the state has negotiated a targeted wage increase for its nurses. However, those pay increases for nurses and other state workers still require approval from the Legislature, which is working on a compromise on the 2017-19 budget.

Although the governor’s and the House Democrats’ budgets include all of the state worker wage increases negotiated last summer, the Senate Republicans’ budget funds only a few of the proposed increases and does not include the pay increase for many state nurses.