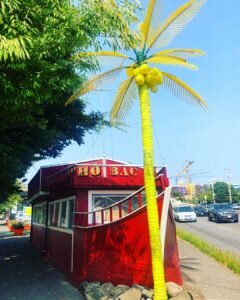 Although historic preservation is often perceived as merely a matter of protecting buildings, it is also about honoring Seattle’s history, its myriad cultures, and the people whose lives are entwined with historic districts and buildings. It is no secret that Seattle’s rapid growth and redevelopment has put pressure on communities across the city. This three-part series examines how community members are working within the International Special Review District (ISRD), one of the City’s eight historic districts, to preserve the buildings and the stories that infuse them.

At the intersection where Boren Avenue meets Jackson Street and emerges as Rainier Avenue sits a sight familiar to many Seattleites – a bright red, boat-shaped building with the words PHỞ BẮC blazoned  across it and the yellow and red flag of South Vietnam at its prow. According to local lore, it was here that Seattle’s love affair with phở began. When its doors first opened in 1982, Phở Bắc was known as Cat’s Submarines – named for Theresa Cat Vu who, along with her husband, Augustine Pham, owned the sandwich shop. It wasn’t long after opening, however, that the family-owned restaurant shifted its focus from sandwiches to bowls of aromatic, savory soup. The iconic red boat and Phở Bắc quickly became a mainstay in Little Saigon and is now operated by Yenvy Pham along with her brother Khoa and sister Quynh. With the recent expansion of the International Special Review District (ISRD) to include all of Little Saigon (previously, the boundary ended at 12th Avenue South), Pham is excited about what the future holds for the neighborhood.

“There are so many opportunities!” said Pham. “This is a hot hub! We have huge stakeholders in the neighborhood who are Vietnamese. They have huge plans to redevelop and do some crazy stuff. I have a lot of hopes for the area!” Owing to shifting land use priorities for the area over the years, Little Saigon is a mixture of commercial, industrial, and warehouse spaces with some housing thrown in for good measure. Pham values this variety: “It’s a wholesale, kind of industrial zone. [There’s a] kind of commingling that is interesting and people have ideas of what they want to see in the neighborhood.” For Pham, this commingling isn’t simply about the differences in zoning. It also offers a possible roadmap for what the future development in the neighborhood might look like. “I’m really excited about the [Little Saigon] park and the pass-through between Jackson and King. Lam’s Seafood just bought an acre of land between King and Weller,” she said. “Once they redevelop, the passthrough could continue on to Weller. Hopefully, my organization, Friends of Little Saigon can start collaborating with Lam’s Seafood or Goodwill to have our cultural spots – our night markets.”

“It’s the next generation wanting to keep the nostalgic upbringing that we had here. Twenty years ago, it was very poppin’, very lively, a totally different feel than it is now. How do we adapt to the times—how do we modernize—but also keep the heritage alive?”

The expansion of the ISRD and rapid development around Seattle has prompted community members of Little Saigon to consider important questions about how to plan for the future while being mindful of the past. “It’s the next generation wanting to keep the nostalgic upbringing that we had here,” observed Pham. “Twenty years ago, it was very poppin’, very lively, a totally different feel than it is now. How do we adapt to the times—how do we modernize—but also keep the heritage alive?”

Concern for the character of the neighborhood and the communities that make use of the services that are provided there is one area where Pham sees the ISRD making a big impact in Little Saigon. “[The ISRD] will help by getting developers and property owners to be more conscientious of what they can – and want – to do for this area and asking how it benefits the cultural heritage of not just the Vietnamese community, but all the ethnic communities that have gone through here,” Pham stated. “We’ll guide [developers] to have a certain vision but have the flexibility to be kind of chaotic about it. There’s no preference for a certain structure, it’s more like having the passion and heart to make this area very characteristic.”

With plans for new housing, commercial spaces, and other development already being discussed, Pham speaks with confidence about the future of Little Saigon. “I think [Little Saigon] will always be what it always is – a really random array of random stuff and it shouldn’t be contained,” she said. “[People] just have to learn how to cope with us.”