You are here: Home / Archives for University of Washington

The Huskies defense came to the aide of the offense with a defiance stand in overtime to over come the teams bumbling and stumbling ways during regulation play. The Huskies missed two field goals, were flagged eight times for 63 yards and had one pass interceptions.

Coming into the game the Huskies were the least penalized team in the Pac 12, had the top scoring defense in the country and  had an offense that had scored 40 points in six straight games.

Husky running back Lavon Coleman ran for a career high 181 yards and quarterback Jake Brown did just enough to lead the Huskies to the win. Browning hit Dante Pettis on a 4yard touchdown in overtime to for the game winning score. Browning was 14-21 for 160 yards passed for two touchdowns and ran for another. Browning miscued on a couple of passes that had receivers open and the inability to execute on those plays kept Arizona in game.

What Washington ran into was a resilient Arizona team that has had a knack of beating a  Top 25 team.  Arizona has defeated a ranked  team every year under head Coach Rich Rodriguez.

Arizona quarterback Brandon Dawkins scored three rushing touchdowns, ran for 176 yards and passed for 167 and nearly tied the game in overtime but his desperation pass to Tyrell Johnson on fourth down was batted down by Husky defender Jordan Miller in the endzone for the Husky win.

THE TAKE WAY
Washington’s prime directive was to win the game, UW coach Chris Petersen said the game would be close and come down to the 4th quarter. At first glance this sounded like coach speak, but in looking back it makes sense. Washington’s first three games were against none conference foes and at home. Washington needed to overcome some adversity against a respected opponent to build some confidence. Mission accomplished. Up next will be a Friday night (6 p.m.PT )clash with 7th ranked Stanford at Husky. 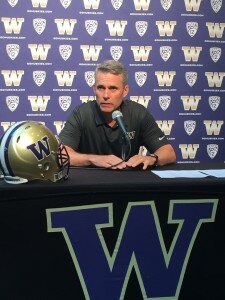 The N0.9 ranked University of Washington (3-0) will leave the comfy confines of home and head to the Desert to face  the Arizona Wildcats (2-1) in Tucson Arizona Saturday night (7:30 p.m. PT ) to kick off Pac 12 play for both teams. The Huskies, ranked No. 9 in both this week’s Associated Press Top 25 and USA Today coaches’ poll, enter Saturdays  game on a six-game winning streak, having scored 40 or more points in each of those six wins.

Washington has a defense that is as good as any in the country, the Dawgs defense has given up just 30 points in three games and most of those points where scored against second and third team players.  The question is how good is the offense. The numbers are prolific, Washington has scored 40 or more points in six straight games for the first time in school history, with 52, 45, 44, 48, 59 and 41 points in their last six, an average of 48.2 per game. Quarterback Jake Browning  leads the FBS in pass efficiency (206.9) entering this week, tied the school record for TD passes in a game with five vs. Idaho and  threw four more vs. Portland State, giving him nine over that two-game stretch, most ever by a Husky QB over back-to-back games.

Washington’s  run game has been sluggish compared to the passing game. Running back Myles Gaskin  came into the season with  All Pac 12 hype, but those expectations have been tempered to say the least. Gaskin has yet to rush for over 100 yards in game. Should be a concern if he can’t break the century mark against  Rutgers, Portland State  and Idaho ? Washington will need to have a balanced attack against the Wildcats who  have a banged up defense but still a decent  Pac 12  defense.

After the season opener to BYU 16 to 18 in Glendale Arizona, the Wildcats beat Grambling  State 31 -21 and Hawaii 47 to 28 to gain some swagger going into Saturdays with  the Huskies.

The pressing question for Arizona is the quarterback position, where starter Anu Solomon has missed the last two games with a knee injury. Brandon Dawkins showed noticeable improvement from his first start to his second,  and is a decent runner if  he needs to use his fee. Arizona has forced multiple turnovers in five of  its last six games dating back to the 2015 season. That has produced a plus-7 turnover margin in those games, boosted by a current plus-6 margin in the first three games this season

The Wildcats are 20-2 under Rodriguez when winning the turnover battle, 10-5 when the margin is even, and 5-14 when the opponent has fewer turnovers … Last season at Washington, the Wildcats turned the ball away four times and did not gain one takeaway.

The other question  is wether Arizona will be able to slow down Jake  Browning  and his fleet of talented receivers? Like Washington, Arizona will need to establish a running game to keep the talented Husky defense on its back heels. The Wildcats  will need to play an error proof game if they are to have a chance. Washington’s specials  teams are just as dominant so Arizona will need to be disciplined in all phases of the game.

Washington holds an 20-11-1 edge in the series against Arizona, with the Huskies taking 13 of the last 21. Last year on a stormy Halloween night at Husky Stadium, the UW won, 49-3. Jake Browning was 16-for-24 for 274 yard and four scores while the UW defense forced four turnovers. Two seasons ago, in the most recent meeting in Tucson, Arizona got a last-second, 47-yard field goal from Casey Skowron to beat the Dawgs, 27-26.

University of  Washington quarterback Jake Browning threw 5 touchdown passes in leading  8th ranked Washington (2-0) to a 59 to 14 win over the Idaho Vandals ( 1-1) at Husky Stadium Saturday in front of 60,678 fans.

Keishawn Bierria recovered an Idaho fumble on the opening kickoff on the Vandal 21 yard line to set up Browning and the Husky offense for their first score. Browning hit Dante Pettis from 21 yards out for the Huskies first score 16 seconds into the game.

The Husky offense sputtered on its next three offensive possessions before Browning found his rhythm to lead Washington to four consecutive scores three of which were scoring passes in the second quarter.

Browning finished the scoring onslaught with a nine yard pass to John Ross to give  the Huskies the 35-0 lead at halftime.

Browning’s hot streak continued into the third quarter as he hit John Ross with an eight yard pass for his fifth touchdown of the game during the Huskies first drive in the second half. The pass was Brownings last of the game as he gave way to back up K.J Carta-Samuels who finished the game at quarterback.

With both teams playing backups, the Vandals where able to score two touchdowns before Washington closed out the scoring with 34 yard field goal by Cameron Van Winkle and a 46 yard interception return for a touchdown by Connor O’Brien.

While the Husky rushing game struggled for the second consecutive game with a team total of 126 rushing yards. Despite the subpar running performance, Husky head coach Chris Petersen was pleased with his teams effort.

Browning finished the game with  294 passing yards and completed 23 passes  on 28 attempts. Browning joined Keith Price (2012), Jake Locker (2010) and Chris Rowland (1973) as the only Huskies to throw five touchdown passes in a game.

The Vandals will be Pullman to take on the Washington State Cougars.

The 8th ranked University of Washington Huskies( 1-0) will take on the Idaho Vandals (1-0) Saturday afternoon at Husky Stadium with a scheduled 2 p.m. PT start time. The game will air on the Pac 12 Network. The Huskies opened the season with a 48-13 win over Rutgers last Saturday in Husky Stadium, while the Vandals began their season with a 20-17 home victory over Montana State on Thu., Sept. 1.
Game Notes:
THE COACHES
Chris Petersen is in third season as the head coach of Washington( 16-11) after eight season as the head coach at Boise State (92-13).
Petersen went 5-0 against the Vandals while he was at Boise State.
Paul Petrino is in his fourth season at Idaho (6-29).This is Petrino’s first head coaching position.
UW key players
QB Jake Browning: 287 yards, 3 TD, 1 INT last week
WR John Ross III: 5 catches, 90 yards, 2 TDs plus kick-return TD.
LB Keishawn Bierria: 12 tackles (11 solo), 1 FF last week
CB Kevin King: 7 tackles, 2 TFL

Running game: In it’s solid 48-13 victory over Rutgers, the Husky offense was dominant in the passing game and not so much in the run game. Quarterback Jake Browning passed for 287 yards and three touchdowns. Washington managed just 107 total rushing yards while Sophomore running back Myles Gaskin accounted  for 57. Myles rushed for 1,320 yards in 2015. The Huskies will be looking to unleashed the talented running backs against the under matched Vandal defense.

Dangerous returns:The Huskies had a kick return for a touchdown (John Ross, 92 yds.) and a punt return for a TD (Dante Pettis, 68 yds.) in the win over Rutgers. Idaho punter Austin Rehkow was on the preseason watch list for the Ray Guy (best punter) award.