You are here: Home / Archives for Oakland Raiders

While Beast Mode has moved on and become a clothing line store owner, the formula that brought him and the Seahawks fame and fortune was evident in the Seahawks 23 to 21 win over the Oakland Raiders in Oakland  Thursday night.

Said formula is rather simple, play good defense all game long and wait for your offense to find its rhythm in the running game and wear down the opponent with punishing runs.

With offensive and defensive starters playing a maximum of two series, Thursday nights game served as a double bonus opportunity for the Seahawks coaching staff, see if the players hoping to make the team were  able to  play at a high level while  executing the Seahawks winning formula.

The  score line of the first three quarters of the game between the former AFC West rivals looked more like a baseball score at  5-3 with the home side holding the two run lead courtesy of an intentional grounding call against Trevone Boykins that resulted in a safety and a 27 yard field goal by Sebastian Janikowski. Steve Hauschka chipped in a 39 yard field for the Seahawks in the quarter to keep it close .

Janikowski pushed Oakland lead to 8-3 wiht another field goal from 45 yards out and right on cue, the Seahawks decided it was time to implement the tried and true formula of good defense and a punishing ground game.

DE Ryan Robinson intercepted a Connor Cook pass and rambled 42 yards for a touchdown to give Seattle the 10-8 lead. The Seahawks went for the two point conversion after the TD but the pass attempt failed   The The defense continued it surge, held the Raider offense to a three and out offensive possession.

With the top half of the Seahawks formula checked off, that being good defense, all that was left was for the bottom half of the equation to be factored in. On their next possession the  Seahawks went on a six play, 63 yard drive that was capped off by a five yard run by Troymaine Pope.

Five of the six play on the drive where running plays between Pope( 17 yards) and Alex Colins (32 yards) and roughing the passer penalty Oakland  linebacker Shilique Calhoun aided the drive.

Oakland tried to make a game of it when with a  George Atkinson one yard touchdown run on its next possession to cut the lead to 16-14 , but the Seattle defense stopped the Raiders attempt at a two point conversion that would have tied the game.

With the defense bending but not breaking, the Seattle offense made good on their end of the bargain on its next possession that started with a Pope run off right tackle for 33 yards that was aided by another Oakland penalty that moved the ball to the Oakland three yard line. Collins came in to relieve Pope and finished the drive with a one yard touchdown run,and   Steves Hauschka extra point stretched  the Seattle lead to 23 to 14.

George Atkinson returned the ensuing kickoff 81 yards to give the home run some hope but it was for naught as Seattle recovered Oakland’s  onside kick attempt  after the touchdown and ran out the clock to finish the regular season with a 3-1 record. Seattle finished the game with 126  rushing yards, 86 of this yards came in the fourth quarter.

” I though the runners did a nice job a nice job, I thought both Troymaine and Alex did an nice job of finishing for us,” head coach Pete Carroll during his post game conference on Seahawks.com.  ” The defense  played tough all night and kept us in it and it was a good tough finish.”

Seattle running back Thomas Rawls appeared in the game and had two carries for seven yards. This was the first time Rawls saw any game action since injuring his ankle at Baltimore last season 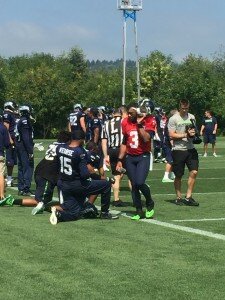 The Seattle Seahawks finished their final preseason practice Wednesday morning, packed their  packs and headed to Oakland to take on the Oakland Raiders 7:00 p.m. PT  in the final preseason match up before the home opener on Sunday September 11th against the Miami Dolphins. Thursdays game will serve as a last chance for some players to show the coaches they can help the team. Time is of the essence for the fringe players as the team must trim its current roster of 75 players to 53 on Saturday September 3rd by 1 p.m PT  per league guidelines.

Here are three things to keep an eye on during Thursdays  preseason finale.

This is where the rubber meets the road for the Seahawks offensive line candidates. Justin Britt has solidified his position as the starting center and rookie Germain Ifedi ( right guard ) and  Mark Glowinski ( left guard) look to be keepers at the respective guard positions. Garry Gilliam, J’ Marcus Webb and Bradley Sowell are three players battling for two positions. Sowell started at left tackle and Gilliam started at right tackle during last Thursdays 27 to 17 win over the Dallas Cowboys. All three players had a good week of practice with Sowell  apparently gaining the edge at left tackle, leaving Webb and Gilliam battling for the right tackle spot.

“We have a competition at that spot, which is good,” head coach Pete Carroll said of the right tackle battle.“This game will be important again for those guys. We think both of those can play right now, so we’re in good shape there.”

Like any well seasoned and successful coach, Carroll would not divulge any more insight as to what we will see on Thursday until Thursday. The game in the game will be to see where, when and how long Webb, Sowell and Gilliam play.

Thomas Rawls looks to be fully recovered from his injury and Carroll was smug about the possibility of Rawls seeing some action on Thursday night. What is clear is that Rawls will be ready for the opener along with Christine Michael who has matured on and off the field into a professional  running back in the NFL. The coaches has said all along that they love the short term progress from Michael and just need consistency.

With Rawls and Michael looking like they are capable and ready, the question that will need to be answered will be who will back them up. Rookies, Troymaine Pope Alex Collins and C.J. Prosise are vying for a spot in the backfield and will be looking to impress the coaches when their number is called Thursday night.  Pope’s number has been called and he has answered the call by gaining 110 yards on 16 carries.

Collins and Prosise have the biggest hurdles to overcome. Collins has gained 37 yards on 12 carries. The lack of production does not fall squarely on Collins however according to Carroll.

“He’s had some games where he’s had inopportune plays where we got knocked around at the line of scrimmage and he didn’t get a good shot. So this is a really good shot for him to show.’’ Carroll said. ” He has had a really good camp and been good on pass protection.”

Prosise’s situation has been a little different in that he has been hampered by a hamstring injury and saw his first action in last week in Dallas game. Like Collins, Prosise will get plenty of action on Thursday night to show his worth.

” We are gonna get a good look at guys in this game, and C.J. needs to play more football so he will get out there “, said Carroll. “C. J. has done nothing but positive stuff, everything he has  done looks good and we are excited about it, he needs game time.”

Thursdays game will be the 11th-straight year the Seahawks will end their preseason facing the Raiders. In the eleven game stretch, eights games have been in Seattle and three  Oakland.