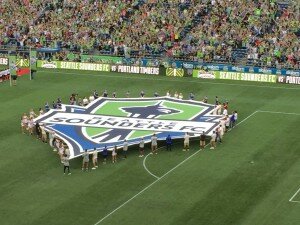 The Seattle Sounders ( 9-12-3, 30 points) continued their march towards respectability and the MLS Playoffs with a 3-1 trashing of Cascadia rivals Portland Timbers (8-9-8, 32 points) Sunday night in front of 53, 302 Green clad fans chanting then on and thirsting for a Sounder victory.

Seattle forward Clint Dempsey obliged the crowd with two goals and Cristian Roldan sent the Rave Green faithful to Nirvana with his 83rd minute goal that sealed the victory and pushed the Sounders undefeated record to four games.

After playing to a scoreless first half stalemate, the Sounders changed to a team attacking style that used the speed of its midfield players and the tactical shift put the Timbers on the back foot because they could not keep up with the speed of the Seattle attack.

” We made a slight adjustment to our spacing at halftime and we where able to find our rhythm,” Sounders interim head coach Brian Schmezter said after the game.

Seattle’s first break came in the 60th minute when it was awarded a penalty when Portland defender Jack McInerney fouled Cristian Roldan in the box and the Sounders were awarded a penalty that Clint Dempsey into the back of the net for the 1-nil lead.

The Timbers nearly leveled the score three minutes when McInerney had a point blank shot that Seattle goal keeper Stefan Frei blocked with his feet.

Hey @MLS, here’s your Save of the Week! #SEAvPOR pic.twitter.com/J1OHkpCi6r

The heart stopping save by Frei inspired his teammates and the Sounders continued their assault on the Timber defense and the result was Dempsey’s second goal of the game and the game winner at the 79th minute mark.

The goal brought relief and adulation to the Rave Green faithful who began a stadium wide celebration in the stands. The celebration turned into an outright block party four minutes later when Cristian Roldan stretched the Sounders lead to 3-0 with eight minutes to go.

Portland’s Fanendo Adi scored a stoppage time goal for the visitors but it was to little too late as the Sounders moved within two points of the Timbers having played two less games.

The Sounders will travel to Houston on Wednesday to take on the Houston Dynamo. Win over the Dynamo would vault Seattle into the sixth and final playoff spot in the Western Conference.