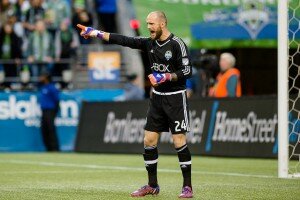 The Seattle Sounders Wednesday night 2-1 pre season loss to the Vancouver Whitecaps at Kino Sports Complex in Tucson was just that a pre season match that was designed to let the players kick the ball at someone other than their own team mates and in the case of  Sounders FC give the 4-4-3 formation a try.

Sounders FC head coach  Sigi Schmid unveiled his teams much talked about 4-3-3 formation in the first half against the Whitecaps, Designated Players Clint Dempsey, Obafemi Martins and Nelson Valdez led the front line ahead of the midfield  trio of Osvaldo Alonso, Erik Friberg and Andreas Ivanschitz. Stefan Frei manned the goal with Tyrone Mears, Jimmy Ockford, Chad Marshall, and Joevin Jones filling up the back four.

While the Sounders new formation generated some chances, the club hit the  half time break with nothing to show for their  efforts. “I thought for the first time out, we played it really well,” Schmid said in a Thursday morning conference call from Arizona.

“I thought as the first half went on that group got better and better. I was pleased. … Now there’s still things we have to adjust and have to tweak about it.  That’s why you play games. But it certainly answered [some] questions for us.”

Vancouver Whitecaps FC head coach Carl Robinson countered with a 4-2-3-1 formation that featured David Ousted in goal with Fraser Aird, Cole Seiler, Christian Dean, and Jordan Harvey forming the back line. In front of them, Matias Laba and Russell Teibert partnered in midfield, Erik Hurtado and Cristian Techera occupied the wings, while Nicolas Mezquida played behind Kudo as a central, attacking midfielder.

Both coaches brought  on completely different line ups for the second half in keeping with the preseason experiment  theme and it was the Whitecaps FC who drew first blood in the 53rd minute on a Darren Mattocks penalty kick following a Damion Lowe  foul in the box.

Seattle equalized in the 77th minute when Aaron Kovar sent  a well-placed through ball down the middle to Darwin Jones  who fired it home for the club’s first goal of 2016. Mattocks gave Vancouver the 2-1 edge with a 90 minute late winner after  a Seattle mis-clearance inside the 18-yard-box.

Seattle captain Brad Evans did not participate in the game as he continues to recover from tightness in his hamstring and Jordan Morris did not participate due to his call up to the United State men’s national team. Morris is expected to the join the Sounders some time this weekend after the USMNT team match against Canada on Friday.

The 2016 Sounders FC Preseason presented by adidas will continue on Saturday when the Rave Green take on  the Portland Timbers, with kickoff set for 5:00 p.m. PT at Kino North Stadium. The Sounders will then play its third and final Desert Friendly on Tuesday, February 9 against Mexican side Celaya FC before returning to Seattle on February 10.