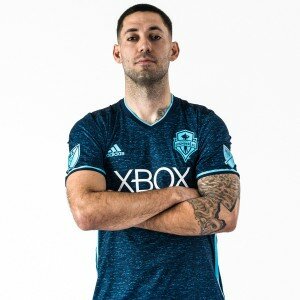 The Seattle Sounders finished their 2106 pre season with a 4-0 win over division rivals LA Galaxy at the Stub Hub Center in Carson, California. Midfielder Andreas Ivanschitz had a goal in each half as he led the Rave Green to their first win after three losses. Defender Chad Marshal had the other first half goal as the Sounders grabbed  a 2-0 halftime lead in a game that was played in a water logged pitch.

Clint Dempsey and Ivanschitz  each found the net in the second half  to give the visitors the 4-0 lead that propelled the Rave Green to a much needed feel good win. The win definitely picked up the mood of a team that was dealing with uncertainty and puzzlement regarding want away strike Obafemi Martins future with the club. The Nigerian striker had been rumored to be in negotiations with Chinese Club Shanghai Shenhua.

Rumors turned to fact when the Nigerian striker tweeted a thank you and goodbye tweet to Sounders fans Wednesday night. Wednesday turned out to be a bittersweet day for the Sounders and their fans, a win over a divisional rival, the debut of a third ” Sky Blue “ kit and the loss of a teammate.

While the  Martins deal has not been confirmed by either the Sounders or Major League Soccer,  Sounder Coaches Schmid said during a conference call with media members on Thursday he had nothing new to add to the conversation and his focus was on the team moving on an preparing for the upcoming season.

“As with anything that happens in life, you gain knowledge of it at various times,” Schmid said of the situation, “and you just cope with it.”

Seattle will begin the 2016 regular season campaign Tuesday night at 7 p.m. when it hosts Club America in Leg one of the CONCACAF Champions League quarterfinal.