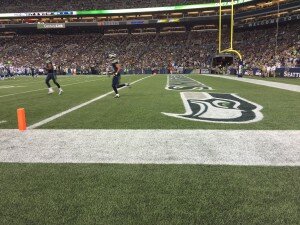 Seattle quarterback Russell Wilson led a solid Seattle offensive outing as  the Seattle Seahawks beat the Dallas Cowboys 27 to 10 Thursday night at Century Link Field. Dallas quarterback Tony Romo was injured on the the Cowboys opening drive and left the game due to a back injury.

Back up quarterback Zack Prescott took over and showed that he is an able back up to Romo, when he hit Jason intensity on a 17 yard pass in the back of the endzone to give Dallas the 7-0.

WOW. ?
Jason Witten had no business catching this ball.

Seattle answered the Dallas scoring play with a 27 yard field goal from Steven Hauschka and took the lead when Russell Wilson hit Paul Richardson on a 9 yard pass play for the 10-7 lead.

Wilson was 4-4 on the drive as he used his arm as well as his legs to escape the on rushing Dallas defenders.

The preseason contest had every bit the feel of a regular season game with starters from both sides seeing significant playing time. The Cowboys starters played one half and the Seahawks offensive starters played the first two series of the third quarter.

” Game three of the preseason is like a mock game of a regular season game, ” said Seahawks cornerback Deshawn Shead after the game. ” We treat this as the best dress rehearsal going into the season, that the intensity of it, we treat every game like its a championship game but this was an opportunity for us to prove that we can come back to Century Link and win at home.”

Seattle backup quarterback Trevone Boykin scrambled down the left end of the field for a 16 yard touchdown after he relieved Wilson on the Seahawks third offensive series of the third quarter. Seahawks running Christine Michael looked to have cemented his place in the Seahawks backfield with a solid performance in which he gained 58 yards on seven carries. Rookie C.J. Prosise saw his first preseason action, and finished the game with 23 yards on four carries.

The Seahawks have the next two days off and will return to work on Sunday as they prepare for their last preseason game against the Oakland Raiders in the Bay Area on Thursday, September 2nd at 7 p.m PT.