The Seattle Seahawks announced today that Lourdes E. Alvarado-Ramos (Alfie), the director of Washington State Department of Veterans Affairs (WDVA), has been named the local recipient of the NFL Hispanic Heritage Leadership Award. This award recognizes the contributions of Hispanic leaders in each NFL market. This is the seventh year that the NFL and the Hispanic Heritage Foundation (HHF) have partnered with the Seahawks in celebration of Hispanic Heritage Month.  Each award recipient will select an organization of their choice that serves the local Hispanic community to receive a $2,000 donation. 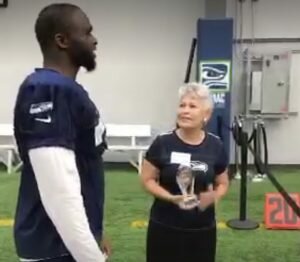 In 2013, Lourdes E. Alvarado-Ramos was appointed by Governor Jay Inslee to serve as the director of Washington State Department of Veterans Affairs (WDVA), the first woman to hold the post.  The WDVA serves as an advocate for Washington State’s military veterans and their families.  The WDVA operates three Veterans Homes that provide long-term nursing care and offers a number of programs ranging from Post-Traumatic Stress Disorder Counseling to services for homeless veterans. As WDVA Director, Alvarado-Ramos is a member of Governor Inslee’s Executive Cabinet and serves as the Chair of the Governor’s Healthy and Safe Communities Council that is charged with fostering the health of Washingtonians from a healthy start to a safe and supported future.  She also serves as Co-Chair of the Washington State Military Transition Council.

A Puerto Rico native, Alvarado-Ramos served 22-years on active duty, retiring in August 1993 as Command Sergeant Major and Troop Command Sergeant Major of Madigan Army Medical Center in Fort Lewis, Washington.  During her military career, she was the recipient of numerous awards and decorations including the Legion of Merit, Order of Military Medical Merit, Expert Field Medical Badge and Meritorious Service Medals.

She is an alum of Harvard University John F. Kennedy School of Government Executive Program, the University of Washington Executive Management Program and holds a Master’s Degree in Health Care Administration. She is also a licensed Nursing Home Administrator.  She is the recipient of local, state and national awards including the Governor’s Distinguished Management Leadership Award, the Lifetime Achievement Award for women in the military from the Young Women’s Christian Association (YWCA) and the Veterans Affairs Secretary’s Leadership Award.