You are here: Home / News / African American / Planning The Future For MLK Jr.’s Hearse On 50th Anniversary Of His Death 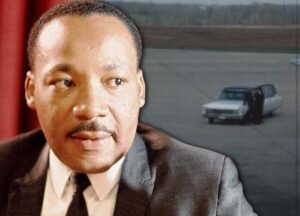 Fifty years ago, a 1966 Cadillac Superior Coach hearse carried Martin Luther King Jr.’s body to the Memphis airport to be flown back to Atlanta and laid to rest.

Today, that hearse has been restored and its owner hopes that soon it will be on public display as a reminder of the tremendous sacrifice it represents.

Gary Zimet, whose memorabilia business Moments in Time specializes in rare letters, manuscripts and other historic artifacts, says the hearse’s owner discussed with him the idea of selling the vehicle to a corporation or philanthropist willing to donate it rather than keep it hidden away privately. The goal is for the hearse to end up in a museum, preferably the National Civil Rights Museum in Memphis, or the National African-American Museum at the Smithsonian, which opened in 2016 without any artifacts related to King.

“It’s much too important a piece of history for it to end up in a private collection,” Zimet says. “It is the ultimate link to King’s martyrdom.”

A website, www.PreservingTheDream.com, has been established where people can learn more about this priceless artifact and the role it played in the nation’s history.

King died at the hands of an assassin on April 4, 1968, and this year marks the 50thanniversary of his death. That same day, the hearse transported King’s body from St. Joseph Hospital to the R.S. Lewis and Sons Funeral Home. A day later, it was used for the first funeral service in Memphis before the hearse took the journey to the airport, where Coretta Scott King awaited her husband’s body.

The hearse has been in storage for about 40 years before it was obtained from the original owner, Memphis Cadillac Superior Coach dealer Zane Smith. Five years ago it was restored to its original condition.

“The owner could have auctioned this off years ago,” Zimet says. “But he wants to put this significant piece of Civil Rights and American History where it can benefit the most people, which is why he is hoping a philanthropic individual or corporation will secure this national treasure for donation to a major museum where it can be seen by millions for generations to come.”

Gary Zimet is president of Moments in Time, which deals in rare original autographs, historical documents and other artifacts. Among the items he has sold over the years were a letter from President Jimmy Carter to his brother Billy, a letter from Martin Luther King Jr. to Rosa Parks, and Abraham Lincoln’s signature on a copy of the 13thAmendment to the U.S. Constitution.