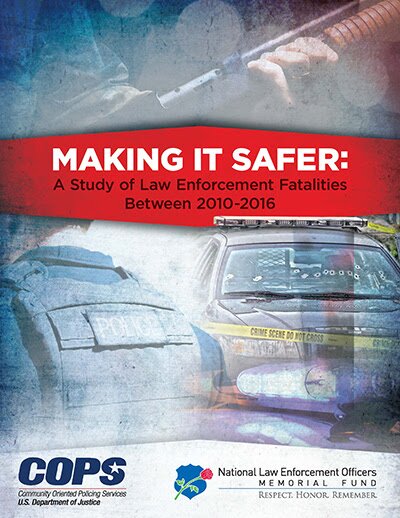 The National Law Enforcement Officers Memorial Fund, in partnership with the United States Department of Justice’s Office of Community Policing Services (COPS), has released Making it Safer: An Analysis of U.S. Law Enforcement Fatalities Between (2010-2016), a report that contains data-driven analysis of line-of-duty deaths across an array of circumstances. This report is authored by the Memorial Fund’s Director of Officer Safety and Wellness Nick Breul and Sr. Project Manager Desiree Luongo.

The primary purpose of this report is to provide an in-depth analysis of the types of calls for police service that resulted in a law enforcement fatality, identify any emerging patterns or trends and offer recommendations which will reduce future fatalities. Spanning from 2010 to 2016, Making it Saferprovides statistical and tactical data relating to the circumstances of these line-of-duty deaths. The researchers found that “Domestic Disturbance” calls continue to present the most danger to officers summoned to investigate complaints. The analysis of these encounters can help policymakers and practitioners identify opportunities to improve officer safety, as it contains real case studies which can serve as good examples of situational opportunities.

Similarly, the report addresses instances where officers were killed when they took independent action to address violations of the law or to investigate suspicious circumstances. The research into “Self-initiated Activity” highlighted that traffic stops posed the greatest danger to officers who are actively enforcing laws. The report offers recommendations on how officers can learn from the case studies provided and handle such calls in a safer manner.

In a third segment of the report, the researchers conducted an analysis of cases the Memorial Fund deemed to be shooting ambushes of officers during 2010-2016 period. This analysis provides insight into the number of cases that occurred while detailing the circumstances in which officers were fatally assaulted. The report found that more than 20 percent of officers who were killed in ambush attacks were shot while seated in their patrol cars.

Making it Safer also includes a review of the use of body armor by officers involved in a specific series of fatal incidents, as well as the use of seatbelts in fatal automobile crashes over the same period. The report reveals that in one year, 52 percent of officers killed in automobile crashes were not wearing their seatbelt.

Additionally, the researchers used the Memorial Fund’s extensive database of line-of-duty deaths dating back to 1791 to review “Police-on-Police” shootings and put them into historical context. Although the frequency and number of these cases has diminished, these tragedies continue to occur and are largely preventable. Many of the cases examined involved an officer inadvertently shooting a fellow officer as they struggled with a suspect, an officer unintentionally striking a fellow officer with his firearm, or officers engaged in a shootout with an armed suspect but mistakenly shooting a fellow officer during the commotion.

The wide-ranging report was reviewed by a distinguished committee of law enforcement executives and practitioners who shared their insight into how the men and women who are on the front line of law enforcement can perform their duties in a safer manner.

The eye-opening statistics and poignant case studies, along with easy-to-understand informational graphics, will help law enforcement agencies across the country work to make it safer for those who serve. The report can be found here: www.LawMemorial.org/MakingItSafer.