You are here: Home / LifeStyle / Food / New Campaign Calls on McDonald’s to Hold the Antibiotics from Their Meat Supply Chain 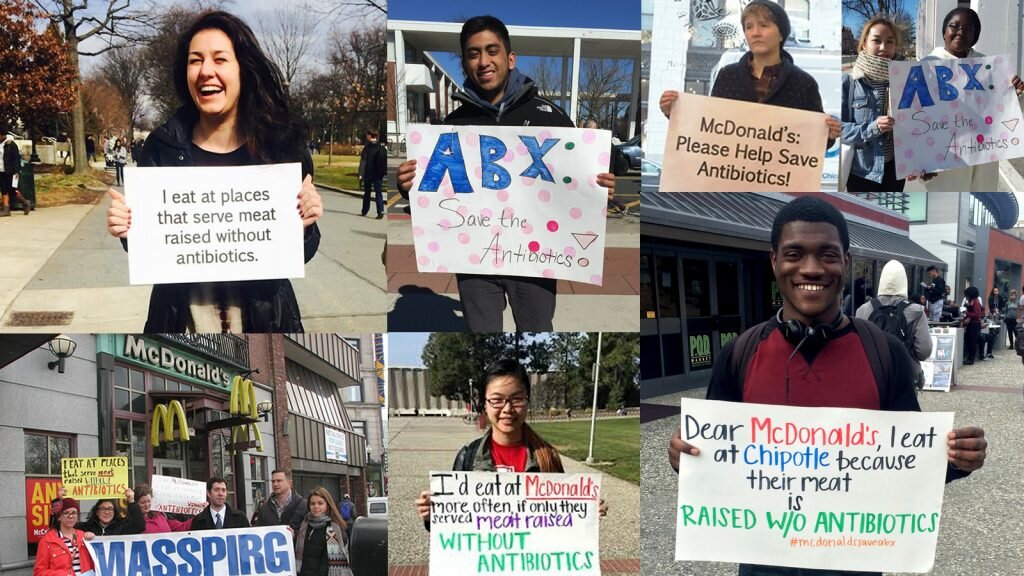 The consumer and public health advocacy organization WashPIRG Foundation is calling on McDonald’s to commit to a concrete timeline to phase out routinely using medically-important antibiotics in its beef and pork supply chains. The WashPIRG Foundation is singling out the iconic fast food company because McDonald’s has an outsized influence as the biggest purchaser of beef in the United States, and it has a vague long-term antibiotics plan. Health experts, including the World Health Organization and American Academy of Pediatrics, warn that the routine use of antibiotics on animals that aren’t sick fuels drug-resistant bacteria, a major health threat to humans.

“Protecting antibiotics requires action, not reaction. If we don’t act now to preserve the effectiveness of these medicines, we’ll face a world in which common infections once again kill” said Elise Orlick, Director of WashPIRG Foundation. “The Big Mac can make a big dent in stopping the misuse of antibiotics in our food system.”

“We are seeing an increasing number of patients with multi-drug resistant infections, which are difficult to treat due to limited antibiotic options,” said Dr. Afrah Sait MD, Infectious Disease Fellow at Tufts Medical Center. “In order to prevent bacteria from becoming resistant and ensure our antibiotics remain effective for patients who need them, it is critical for all of us to carefully consider when and how antibiotics are used and employ them only when absolutely necessary for saving lives.”

As part of the national campaign launch, U.S. PIRG Education Fund has started gathering signatures on a petition urging McDonald’s to take action on its beef and pork supply chains. Nearly 10,000 people have already signed on in support. The message is clear: a commitment from McDonald’s to stop selling beef and pork raised with the routine use of antibiotics will help protect our ability to treat infections and save lives.

McDonald’s recently released a vision for phasing routine antibiotic use out of its entire meat supply chain globally, but it has yet to commit to a timeline for making that vision a reality.

To McDonald’s credit, the company stopped serving chicken raised with medically-important antibiotics in 2016, ahead of schedule. At the time, consumer and health advocates, including WashPIRG Foundation and partners, applauded the company’s actions and influence. Now, 14 of the top 25 restaurant chains in the U.S. have committed to no longer source chicken raised with routine antibiotics, according to the Chain Reaction report.

“We convinced McDonald’s to stop serving chicken raised on life-saving medicines,” noted Orlick. “Now, it’s time for the biggest burger chain in the country to make the same commitment for all the meat they sell. Doing so will help protect doctors’ ability to treat infections and save lives.”

The latest numbers from the Food and Drug Administration show sales of medically-important antibiotics to use on food animals decreased from 2015 through 2016, marking the first decline in year to year sales on record. The decline suggests that restaurants’ new attitude toward antibiotics is making an impact. The FDA data also separates antibiotic sales by species for the first time. It shows significant differences among the percentage of medically-important antibiotics going to chicken, cattle and swine — chicken accounts for only 6% of sales, while beef accounts for 43% and pork for 37%.

Some companies including Chipotle, Subway, Panera Bread, Niman Ranch and Applegate have already moved away from all meat raised with routine antibiotic use, or are in the process of doing so. If McDonald’s, which sells a billion pounds of beef in the U.S. each year and a significant amount of pork, commits to only purchase beef and pork raised without misusing antibiotics, we can take a significant step in ensuring that antibiotics are preserved for treating sick people.

Millions of Americans get sick each year with antibiotic resistant infections and at least 23,000 of them die. A recent study estimates that by 2050, drug-resistant bacteria may kill more people worldwide than cancer kills today. Some of the biggest users of antibiotics are large, industrial farms, many of which routinely give antibiotics to livestock and poultry even when animals aren’t sick. Approximately 70% of medically-important antibiotics sold in the U.S. are for use on food animals. To keep antibiotics working, we need to limit their use to situations when animals are sick, or to control verified infectious disease outbreaks on the farm.