You are here: Home / Front Page Slider / National Marijuana Legislation At Fork In The Legislative Road 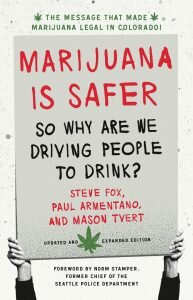 The dream of marijuana advocates is that Congress will pass a marijuana bill that will make pot instantly legal throughout America. But even though the midterm elections brought more people to Congress who support marijuana reform, it looks like that dream may have to wait.
In the meantime, several bills have been filed in the new Democrat-controlled House of Representatives that take different approaches to the issue. The most important differences concern how these bills handle the Controlled Substances Act, which classifies marijuana as similar to heroin and cocaine.
Just like its name implies, HB 420 – the “Regulate Marijuana Like Alcohol Act” – would regulate marijuana just like alcohol is across the country. The second bill, “Strengthening the Tenth Amendment Through Entrusting States (STATES) Act,” would not. A third bill, the “Compassionate Access, Research Expansion, and Respect States Act (“CARERS Act”) would essentially nullify application of the Controlled Substances Act as to medical marijuana in compliance with state law. The CARERS Act also would authorize physicians at the Department of Veterans Affairs to recommend medical marijuana to veterans who live in states with medical marijuana programs.
“It will be interesting to see which of these bills garners the most support,” says Sarah Lee Gossett Parrish (www.sarahleegossettparrish.com), a cannabis industry lawyer.   “HB 420 is certainly more sweeping, but the STATES Act may obtain more bipartisan support, and the CARERS Act likely will be popular with those who believe marijuana should be legalized only when its usage is indicated for medicinal value”
The STATES Act is narrower and relies more on the argument that states should decide how to handle marijuana reform instead of Washington. Supporters of the bill think that approach would also allow a defense for conservative members of Congress who vote for the bill.
“Congress members with conservative constituencies could rest on the tenet that states’ rights issues carry the day, without wading too deeply into the issues concerning legalization of marijuana at the federal level,” says Parrish. “It would also give them a defense against conservative critics who might call them soft on crime or soft on drugs if they support the bill.”
The STATES Act would allow states to legalize marijuana without the threat of federal interference. Unlike HB 420, it would not legalize marijuana at the federal level.
However, it gives each state the freedom to decide how to handle cannabis within its own borders, and more importantly, it would make it unlawful for the Department of Justice to enforce provisions of the Controlled Substances Act against state-legal marijuana users and cannabis businesses.
The Cannabis Trade Federation (“CTA”) supports the STATES Act because it believes this bill has the best chance of passage. Senator Elizabeth Warren and Corey Gardner have championed the bill in the Senate.
Many pot supporters think the CTA should be pressuring lawmakers to sign on with Blumenauer’s 420 bill instead of supporting the STATES Act. HB 420 would allow for the interstate transportation of marijuana, while the STATES Act would not.
A Gallup poll recently found that:
Parrish says regardless of which bill makes it through Congress, it will have a positive impact and will clarify the issue for everybody who involved in the cannabis legalization movement.