You are here: Home / News / African American / NAACP Statement on Starbucks and Growing Climate of Racism and Intolerance

NAACP Statement on Starbucks and Growing Climate of Racism and Intolerance 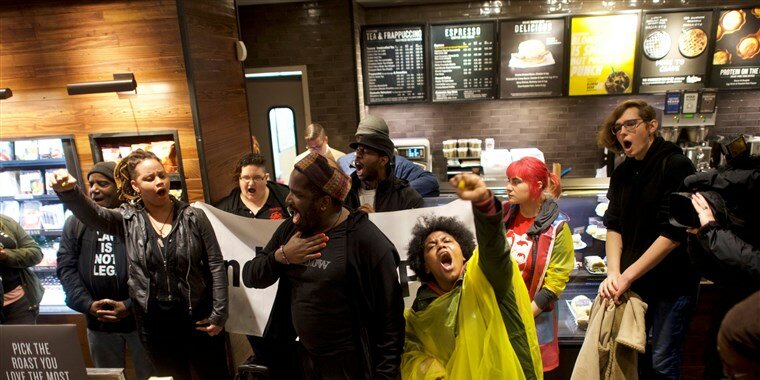 The National Association for the Advancement of Colored People (NAACP), the nation’s premier civil rights organization, issued the following statement following the disgraceful arrest of two African American men in a Philadelphia Starbucks.

“The arrest of two Black men at a Philadelphia Starbucks represents another ominous signal on the increasingly dangerous environment for African Americans. Less than two weeks after we honor the life and work of Dr. King and 50 years after the Kerner Commission found racism and police brutality at the root of public unrest in our communities; we still have a long way to go towards becoming a nation where a person is judged by the content of their character not the color of their skin.

“The Starbucks situation provides dangerous insight regarding the failure of our nation to take implicit bias seriously. We refuse to believe that our unconscious bias –the racism we are often unaware of—can and does make its way into our actions and policies.

“We know if two black men in Philadelphia require six police officers to handcuff and arrest them for waiting to order coffee, then we begin to understand the mindstate that allows for such overzealous and reactionary use of deadly force by those who are paid to serve and protect.

“Every day people of color find themselves at the mercy of the stereotypes and embedded fears of others. How else can we explain why 14-year-old Brennan Walker who missed his bus on his way to school would be shot at by a homeowner just outside Detroit? Or explain Saheed Vassell, a mentally-ill man in Brooklyn fired at ten times and shot dead by police officers. Or why Stephon Clark was shot at 20 times and hit 8 times mainly in the back by police officers in Sacramento, based on the assumption that he was the culprit responsible for breaking into cars. We are at least glad in the case of Starbucks that no one mistook a wallet for a gun.”

“All too often these issues are discussed in passing episodic ways by media. Racism and biases that make simply breathing while Black so dangerous will not just go away without our society committing more resources to discussion, education and training on implicit bias and racism. If we refuse to, we’ll continue to face the consequences of our failure to do so.”