You are here: Home / Obituaries / In Loving Memory of Inez Jones Maddox 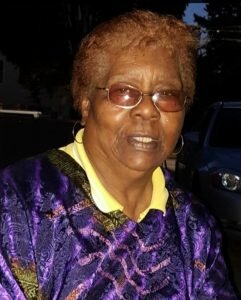 Inez Jones Maddox was born to the late Irene Johnson-Jones and George L. Jones on May 14, 1937 in Hazelhurst, Georgia. She was the eldest of 5 children.

Inez attended school in Hazelhurst and graduated from Henry McNeil Turner High School in Atlanta, Georgia. Upon completing high school, Inez married and from this union she was blessed with 1 daughter, Diane Withers.

In Atlanta, Inez was employed at F.W. Woolworth’s Company, Scripto Pen Company, and Shirley’s of Atlanta. She moved to Seattle, WA during the 1960’s. Her passion was cooking and she became an entrepreneur when she opened her restaurant Inez’s Kitchen located in the heart of the Central Area on 14th & Jefferson. For many years it was a well-known soul food restaurant in the community.

Inez gained her wings on May 3, 2019 surrounded by family and friends. She is preceded in death by her parents, daughter, Diane Withers and brother, George Jones Jr. She leaves to cherish her memory 1 granddaughter Deanna Paulita Lee of Seattle, WA; 2 great grandsons, Jabari Andrews Jr. and Jahmal Withers, Seattle, WA; 3 sisters in Atlanta, Georgia, and her longtime love, Lee Catching, Seattle, WA.