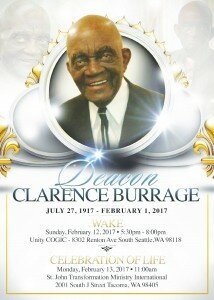 In loving memory of Deacon Clarence Burrage, husband of Evangelist Ruby W. Burrage, father of eleven children, 47 grandchildren, 74 great grandchildren and 26 great grandchildren, not to mention a host of adopted and extended family throughout the world.
“Papa” as he was affectionately called, was a kind man and a faithful member of True Vine Community COGIC. Even at 99 years of age he could be found “cutting the rug” and repeating his favorite saying,”Lord, I Thank You!”
He retired from three jobs, Boeing, University Of Washington, and Burlington Northern Railroad. His motto was, “If one job won’t do, get two! If two won’t do, get three.”
His Celebration of Life will be held on Monday, February 13, at 11:00 am, at St. John Transformation Ministry International, 2001 South J. Street, Tacoma Washington 98405
A Wake will be held, Sunday, February 12, 5:30 – 8:00 pm at Unity COGIC, 8302 Renton Avenue So., Seattle Washington 98118
Flowers and cards can be sent to House of Scott’s Mortuary
1215 MLK Jr Way Tacoma Wa 98405