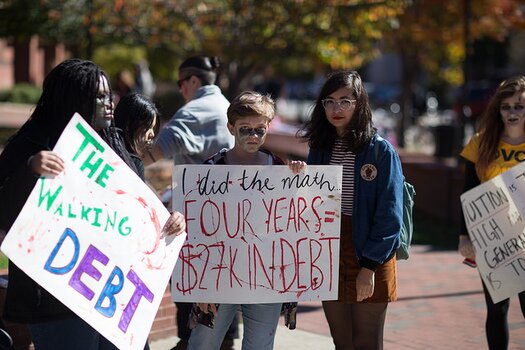 The Financial “CHOICE” Act is a “Cruel Choice” for the Consumer Financial Protection Bureau & Washington Consumers, Including Students

According to the Consumer Financial Protection Bureau’s (CFPB) latest complaints report, student loan complaints by Washington students have surged 732 percent, 2nd largest increase among all states, from last year this time.  The percentage increase is Washington state is more than double the national average of 325 percent.

Meanwhile this week, United States House of Representatives Financial Services Chairman Jeb Hensarling (TX) will hold a Wednesday hearing on his so-called Financial Choice Act 2.0.  The bill leaves Washington consumers and our economy even more vulnerable to Wall Street’s recklessness than before the ’08 crisis by taking aim at all of the 2010 Dodd-Frank Act’s protections caused by unfair bank practices abetted by regulatory failures.

In particular, the bill would gut the Consumer Financial Protection Bureau, even as its latest report shows a critical need for the bureau to protect Washington students.

While the surge in complaints among Washington students is likely driven by publicity around its January enforcement action against servicing giant Navient, nonetheless it is evidence that a lot of Washington students are running into problems with their loan servicers.  According to TICAS’ 11th annual report on debt at graduation, Student Debt and the Class of 2015, 57 percent of Washington State students graduate with an average of $24,600 in student debt.

Forty-nine of 50 states saw complaint increases of 50 percent or more.  Against a backdrop of $1 trillion in student loan debt in the country, the agency has prioritized enforcement action in student lending this year.

“In just under 6 years, the nascent CFPB has restored order to financial markets torn asunder by a decade of weak regulation that emboldened corporate wrongdoers and led to the 2008 collapse,” said Ed Mierzwinski, Consumer Program Director at U.S. PIRG.  “This reckless piece of legislation makes the wrong choice for consumers and the economy while Wall Street and predatory lenders cheer.”

The Choice Act also eliminates numerous important safety-and-soundness and investor protections also enacted in the Dodd-Frank Act after the 2008 collapse.  The committee is expected to vote on the bill as early as May 2nd and bring it to the floor in May as well, the group said.

“The idea of the CFPB needs no defense, only more defenders,” concluded Speight. “It is shocking that a bill that is the wrong choice for students, service members, veterans, and indeed all consumers and our economy is being seriously considered just 9 years after the second-worst financial collapse in our nation’s history.”