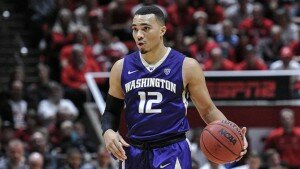 Oregon State (7-8, 16-10) freshmen Stephen Thompson grabbed the inbound pass with 3.3 seconds left in the game Wednesday and ran the length of the court and  made an improbable  Hail Mary  three point buzzer beater that gave Beavers the 82 to 81 win that broke the hearts of the University of Washington (8-8, 16-12) Men’s basketball team. The mind boggling shot  was not only a show stopper for the 5,593  fans who attended the game at Gil Coliseum, it made the Huskies path to the NCAA Tournament  pretty much Mission Impossible.

While the Mission Impossible part might be a little over the top, it’s not far from the truth. The  young dawgs will need to win the Pac 12 Conference that will be in Las Vegas and begins in  fortnight. The talent is there for Washington, the question is weather the young team can stay focused for the four games it will need to win to be crowned  Tournament Champions and earn an automatic bid to the  NCAA Tourney.

Before Washington can dream of Conference Tournament glory, it must heal from Wednesday nights heartbreak. “It’s a tough loss,” Husky Coach Lorenzo Romar told the Seattle Times after the game. ” We did a lot of things again that would allow you to win a ballgame, but we don’t have anything to show for it.”

Truth be told Washington does not have much to show lately. The Huskies are 1-5 ( Stanford 64-53) in their last six games. Ten of the Huskies’ Pac-12 games have been decided by five points or fewer, tops in the conference. And yes we get that this is a young team and  Lorenzo Romar is an amazing individual, but time is of the essence and  the Huskies need to pull it all together and make something of the season.

Andrew Andrews scored 30 points and matched a career-high with six 3-pointers for the Huskies while  Dejounte Murray scored 15 points and Marquese Chriss  chipped in  14 points. Washington’s next game will be this Sunday against Conference leaders Oregon Ducks (11-4, 22-6) in Eugene.