“I shall pass this way but once; therefore any good that I can do or any kindness that I may show let me do it now. For I shall not pass this way again.”

Forever In Our Hearts.

Fitzgerald Beaver was born January 18, 1922, in Martinsville, Virginia. He graduated from high school in Martinsville and then attended North Carolina A & T College in Greensboro, North Carolina in the late 1930s.  Beaver left college without graduating and worked as a railroad porteracross the United States. By the beginning of World War II he had arrived in the Pacific Northwest and was living in the city of Portland, Oregon.

During the war “Fitz” Beaver, as he was now known, worked briefly for the U.S. Army as a civilian employee and then was hired by the Kaiser Company in Portland as a shipyard worker. After the war he briefly resided in North Bend, Oregon where he worked at a local radio station.  Finding a career he liked, he moved to Los Angeles, California to pursue radio and public relations training.

In 1955, he returned to Portland and at the age of 33 became a local radio personality known as “Eager Beaver.”  In 1961, Beaver moved to Seattle, Washington to manage radio station KZAM-FM, the first black-owned radio station in the Pacific Northwest. He stayed at the station only a few months before launching The FACTS newspaper on September 7, 1961.

The FACTS quickly became a major media presence in black Seattle. The paper’s mission stated:  “We try to pick up where the daily papers leave off” meaning the paper would focus on stories not covered by the major daily newspapers but which were of particular interest to black Seattleites.  He gave the paper a distinctive “pink” color to separate it from its competitors. By the late 1960s, Beaver authored a popular column called “Right On!” that discussed local and regional issues.

Beaver was an eclectic personality who often clashed with other black journalists over news related to African Americans such as coverage of the race riots in Seattle and across the nation in the late 1960s.  His FACTS newspaper also became a community icon.  Its office, on the corner of Cherry Street and Martin Luther King Jr. Way, was a familiar landmark in Seattle’s Central District with an old truck situated on top of the slanted roof and a large reader board.

Despite his clashes with other black journalists Beaver also hired numerous young black journalists who went on to other newspapers.  Chris Bennett, owner and publisher of a competing African American weekly newspaper, The Medium, and Ernie Foster, publisher of The Skanner newspaper in Portland, Oregon and Seattle, Washington, were aided by Beaver when they established their respective new

An ardent golfer, Beaver was a founding member of the predominantly African American Fir State Golf Club. He also served as president of the Boys and Girls Club in Seattle and worked with the Army, Navy and Coast Guard in minority recruiting programs in the 1970s and 1980s. 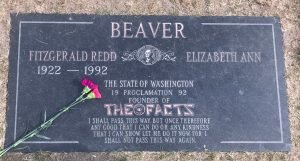 Fitzgerald “Fitz” Beaver died on
New Year’s Day, 1992 in Seattle, Washington at the age of 69.

Survivors include his wife, Elizabeth, and their three children, Dennis, Marla, and LaVonne Beaver who are the current publishers of the newspaper.

Join Us In Honoring The Memory of  Fitzgerald Redd Beaver.