Too many turnovers would prove to be costly for Garfield in a 43-8
home loss to 3A #1 State Division Rank Eastside Catholic.

Attendance was in the hundreds packing out Memorial Stadium for Garfield Bulldogs (2-3) home night matchup vs Eastside Catholic Crusaders (5-0).  Garfield lead by highly scouted #9 Sav’ell Smalls controlled the momentum early forcing EC into two quick early timeouts not even four minutes into the game. Smalls, made his presence felt early with some huge sacks and two force fumbles one recovered by Garfield’s defense. He also played big on the offense side of the ball with some 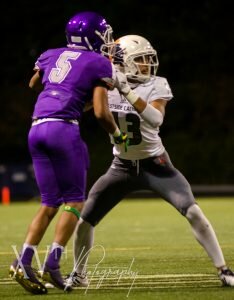 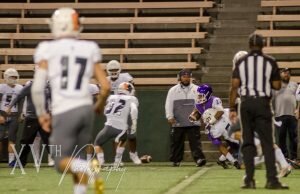 key catches at WR to keep Garfield early drives alive.  Oregon Duck commit #5 Tre’Shaun Harrison show his flare late in the game with a 50-yard TD reception.  Eastside proved to everyone in attendance why they are a top of the 3A division lead by quarterback #2 Zach Lewis who threw for 181 passing yards and 1 touchdown. Eastside’s high-powered offense soon would capitalize early behind some key turnovers and great field position.  The momentum quickly begins to shift behind the hard-running game of #20 Giovanni Ursino who rushed for a game high 22 times and finding the end zone 4 times. When ask what powered your running spirit tonight “It’s my birthday” said Ursino with a big smile. Highly scouted sophomore WR Gee Scott Jr. padded his stat line after a 40 yard catch early and eventually finishing with 3 catches for 79 yards 1 touchdown. Essentially too many turnovers would prove to be costly to Garfield in a 43-8 home loss to 3A #1 State Division Rank Eastside Catholic.

Q: After the now 5-0 start on the season was this expected or unexpected with this group coming into the season?

A: “Yes, we expected to be 5-0 at this point. We have high expectations at our place. We want to go undefeated, want to win state, go to the Geico bowl, and pursue national things. We want to be national ranked. I have never beat around the bush for what we want to do and how good we want to be. Our kids are starting to buy-in. We must continue to take steps forward. We didn’t play real clean today. Have to play better. Have a huge match up next week vs O’dea. Which will most likely decide the metro championship. I know how good they are and how hard they are preparing. I believe we will be ready. We are battle tested.”

Q: How do you feel about the remaining schedule?

A: “Well I am really excited about the O’dea game!
We still have prep (Seattle Prep) and Roosevelt on the schedule.
Obviously, we have been gearing up for O’dea since they beat us here last year. It’s going to be a hard-fought game next week. Its on Root Network at our place 7:00 Friday night – It’s going to be a WAR!”