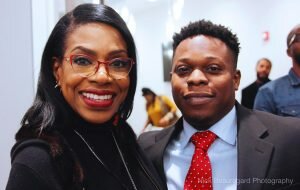 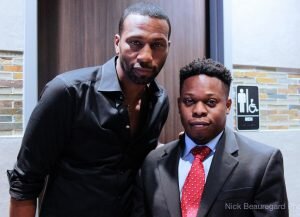 Jelani James is a 29 year old man of many trades. He is a Maryland attorney (JD James & Associates, P.C.), management consultant, director, producer, writer, and musician. RDX films is dedicated to the creation and delivery of premier critically acclaimed content, inspired by the need for diverse, evocative, groundbreaking, thought-provoking, passionate and insightful storytelling, coupled with the application of emerging technologies, which evokes emotion and enriches both mainstream and niche consumers worldwide.

Jelani attended the prostate cancer awareness event at Uppercuts Salon and Spa on December 3, 2017 along with Broadway actress Sheryl Lee Ralph and actor Leon Robinson.  The event provided attendees like Jelani with educational information on prostate cancer and preventative care of the disease.

“I was pleased to see Upper Cuts take a stance on prostate cancer and take action to spread awareness and encourage screenings for early detection of the disease.  I have a personal connection to the cause as my family has recently suffered the loss of three beloved family members to various forms of cancer, including a cousin my age who was not aware of his illness until Stage 4.  This is an issue which affects young and old alike, making early detection an issue of paramount importance, so I am eager to support all events or causes aimed at impacting the prevalence of the disease,” stated Jelani.

Jelani hopes other industry leaders will also get involved in taking a stance on their health and spreading awareness/ preventive methods for the disease.

Learn more about Jelani and his work as a film producer by visiting https://www.rdxfilms.com/