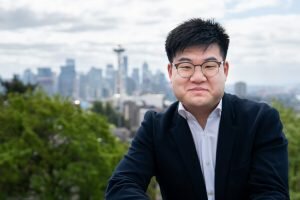 Raised in Seattle, Sam is a proud Korean American raised by his immigrant parents who owned a dry cleaning business in the Fremont neighborhood. He is the current President and CEO of the Seven Seas Export, a company he founded is 2016. As a public servant, Cho began his career at the US State Department as an analyst and went on to work for a member of the United States Congress before receiving a political appointment to work in the Obama Administration.

“I’m running for Port to put people first,” Cho states. “Let’s make sure that the Port is more accessible and working for the people, not just big corporations. The Port is one of the largest drivers of our economy and more people should be enjoying the benefits generated by it”

Cho wants to address issues like modernizing the port, empowering workers and small business owners while protecting our environment. He also plans to build upon the work already done to combat human and labor trafficking at the ports.

“Not only does Sam have policy experience on both the Federal and State level, his unique experience as a small business owner sets him apart. He truly has a heart to serve the people and I’ve seen his work first hand. I can’t think of anyone more qualified to tackle the challenges facing the Port of Seattle,” said Washington State Senator Joe Nguyen and early endorser of Cho.

“The Port of Seattle and King County are among the fastest growing in the nation,” says Cho. “My top priority will be to ensure that as the tide of prosperity rises, it lifts all boats and everyone in King County shares in that prosperity.”

“As an entrepreneur and former Obama Administration official, I know that good policies require even better execution. In that respect, my breadth of experience makes me uniquely qualified for the job. I want to bring my experience and knowledge to make the Port work for the people.”