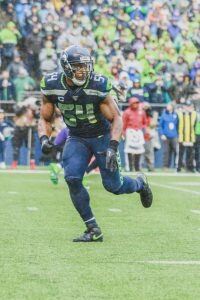 Wagner, an eight-year Seahawks veteran, is a five-time Pro Bowl selection, four-time NFL First Team All-Pro and was a member of the Seahawks’ Super Bowl XLVIII winning team. Off the field, Wagner has quietly invested much of his time serving the community. 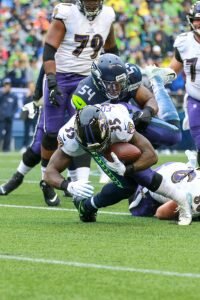 He has led numerous events to support important causes, including “Walk with Wagner” for stroke awareness in the Seattle community, as well as “Bwagz Sees You,” where he delivered supplies to nine homeless encampment sites throughout the city and purchased nine homes for these sites. Each year he hosts numerous holiday shopping events around Thanksgiving and Christmas to support those in need with groceries or Christmas presents. Beyond the Seattle community, Wagner has partnered with nonprofit Generosity Feeds and MOD Pizza to pack meals for 10,000 children in his hometown of Ontario, California, and last year hosted a bowling event for 54 youth from the Orlando community while he was in town for the Pro Bowl. He has been a frequent speaker to youth and coaching organizations, including the Man Up Conference and Coaching Boys into Men, where he spoke about overcoming adversity and becoming an NFL player. Wagner was recently named 2019 NFLPA Week 13 “Community MVP” for quietly packing Thanksgiving meals at a local grocery store and helping deliver them to homeless families in Seattle, while also spontaneously picking up the tab for all the shoppers on site for an hour.

“This means a lot,” said Wagner, on what the Seahawks’ nomination means to him. “I’ve been fortunate to see so many guys around me inspire me do amazing things off the field and do more than just play. I’m thankful to be in the position to make a small difference in our community.”

As a nominee, Wagner will wear a Walter Payton NFL Man of the Year helmet decal through the end of the season in recognition of his accomplishments on and off the field.

For the second year in a row, all 32 team winners will be highlighted as nominees and recognized for their important work during the weekend leading up to Super Bowl LIV.

The 2019 Walter Payton NFL Man of the Year will be announced during NFL Honors, a two-hour primetime awards special to air nationally on Feb. 1, the eve of Super Bowl LIV, on FOX.

All 32 nominees will receive a donation of up to $50,000 in their name to their charity of choice. For his donation, Wagner has selected the HBCU Foundation, which provides scholarship aid to deserving students attending Historically Black Colleges and Universities. The winner of the Walter Payton NFL Man of the Year award will receive a $250,000 donation to the charity of their choice. All donations are courtesy of the NFL Foundation and Nationwide.

Fans are encouraged to participate in Nationwide’s 5th annual Charity Challenge, a social media campaign designed to support and promote team nominees. Fans can vote on Twitter by using #WPMOYChallenge followed by their favorite nominee’s last name. The player whose unique hashtag is used the most between Dec. 12 and Jan. 12 will receive a $25,000 contribution to their charity of choice, while the second and third place finishers will receive $10,000 and $5,000 donations, all courtesy of Nationwide. Hashtag information and official rules can be found at nfl.com/manoftheyear.

More information about the Walter Payton NFL Man of the Year Award can be found at http://www.nfl.com/manoftheyear.