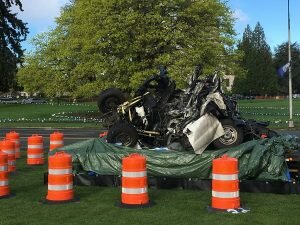 Washington State Department of Transportation held a ceremony Wednesday to remember the 60 Washington workers lost on the job since 1950, honor workers injured on the job and remind drivers to be aware in work zones. The vast majority who died were working in marked roadway work zones.