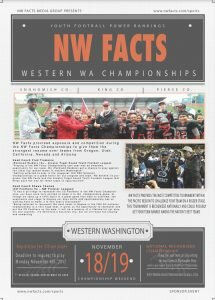 Fall has fallen upon us and the regular youth football season will be coming to an end! As teams fight to become league champions the season does not stop there! This is the time of year where teams that may have started out slow are now firing on all cylinders which are where post-season competition comes into play. NW Facts provides the most competitive tournament within the Pacific Region to challenge your team on a bigger stage.
This tournament is recognized nationally and could possibly get your team ranked among the nation’s best teams.
In 2016, 2 of the 10 teams that participated in the NW Facts championships received an invitation to represent the west coast in the FBU 9u & 10u National Invitational which will be held in Naples, Florida. FBU board of directors followed the NW Facts Power Rankings to identify 9u & 10u teams they could possibly select from. NW Facts provided exposure and competition during the NW Facts Championships to give them the strongest resume over teams from Oregon, Utah, California, Nevada and Arizona.

Head Coach Shawn Thomas (CD Panthers 9u – NW Premier League):
“It was a privilege to represent the CD Panthers in the NW Facts Championship, our boys were very excited to make it to the championship game, although we came up a little short in a great game that went to overtime, the experience and stage to display our boys skills and sportsmanship has us working hard to make it to this year’s tournament”

“Being selected to represent the west coast in Naples in the FBU 9U national championship is a very huge deal, it gives us the opportunity to represent and put the CD Panthers on the map, it will be a memory of a lifetime for our players and coaches, it’s definitely a business trip, but we will have fun playing and competing.

Head Coach Fred Tremaine (Parkland Raiders 10u – Greater Puget Sound Youth Football League):
“Playing in the NW Facts Championship last year was an awesome opportunity for our team. We (Parkland Raiders) got a chance to play against two other top ranked teams in western Washington”

“Getting selected to play in the inaugural 10U FBU National Championships is a great honor for our program and team. We believe its programs like NW Facts and the Greater Puget Sound Youth Football League that helps pave the way for these types of opportunities”

If you feel your team can play among the best teams in Washington State, email us your request to play in the NW Facts Championships. Deadline to request to play will be Monday November 6th, 2017.

Email: westernwashingtonrankings@gmail.com
Registration Fee: $10 per player
** Official league roster must be used. No Add on players. 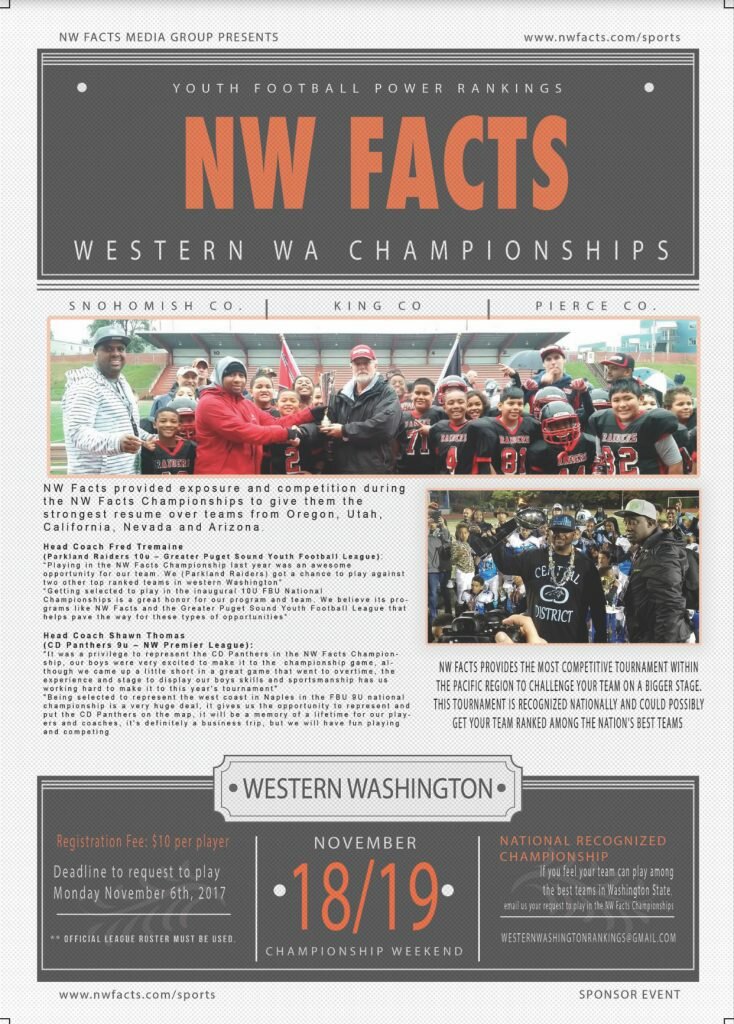